1 And now I, Nephi, proceed to give an account upon these plates of my proceedings, and my reign and ministry; wherefore, to proceed with mine account, I must speak somewhat of the things of my father, and also of my brethren.

2 For behold, it came to pass after my father had made an end of speaking the words of his dream, and also of exhorting them to all diligence, he spake unto them concerning the Jews --

4 Yea, even six hundred years from the time that my father left Jerusalem, a prophet would the Lord God raise up among the Jews -- even a Messiah, or, in other words, a Savior of the world.

5 And he also spake concerning the prophets, how great a number had testified of these things, concerning this Messiah, of whom he had spoken, or this Redeemer of the world.

6 Wherefore, all mankind were in a lost and in a fallen state, and ever would be save they should rely on this Redeemer.

7 And he spake also concerning a prophet who should come before the Messiah, to prepare the way of the Lord --

8 Yea, even he should go forth and cry in the wilderness: Prepare ye the way of the Lord, and make his paths straight; for there standeth one among you whom ye know not; and he is mightier than I, whose shoe's latchet I am not worthy to unloose. And much spake my father concerning this thing.

Words of the doctrine of Christ are spread liberally throughout the Book of Mormon, a “broad spectrum, solid, unyielding, doctrinal treatise.”

There are 145 words speaking of baptism, baptizing, etc, from 1 Nephi to Moroni.  Other words which Marilynne Todd Linford lists, along with references, include covenant, mercy, and prophet.

“Critics of the Book of Mormon seldom speak of the doctrine in it, neglecting the doctrine of Christ that stays consistent though 531 pages, 11 engravers, words of more than 50 individuals, and 1,000 years of history plus the Jaredite nation’s time line.  Instead, naysayers speak of onties, cureloms, adieu, and discrediting Joseph Smith – picky stuff, hoping to divert attention from the meat, the core, the substance.” – Marilynne Todd Linford 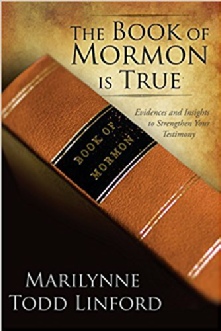 11 And it came to pass after my father had spoken these words he spake unto my brethren concerning the gospel which should be preached among the Jews, and also concerning the dwindling of the Jews in unbelief. And after they had slain the Messiah, who should come, and after he had been slain he should rise from the dead, and should make himself manifest, by the Holy Ghost, unto the Gentiles.

12 Yea, even my father spake much concerning the Gentiles, and also concerning the house of Israel, that they should be compared like unto an olive-tree, whose branches should be broken off and should be scattered upon all the face of the earth.

Seven Claims of the Book of Mormon:  A Collection of Evidences

Claim Four:  The American Aborigines are in part of Hebrew descent

In this chapter the author gives us a phlethora of quotes linking native American languages with the Hebrew (and to a lesser extent Egyptian) languages, Hebrew Bible events and native American traditions, and Hebrew religious rituals and practices with those of the natives of America.  He also documents a number of pre-Columbus voyages from the Old world to the New.

“Toltecs claim to have come to  America at the time of the confusion of tongues, arriving at Hue Pue Tlallapallan after a long hard journey.  The Yucatans have a tradiition that they came originally from the far east, passing through the sea, which God made dry for them.  The Olmec traditions relate that they came by the sea from the East.  The Algonquins preserve a tradition of a foreign origin and sea voyage.  They offered an annual thank-offering for a long time in honor of their safe arrival in America.”

“A planet, a sign in the Heavens, was called ‘ot,” or ‘oth,’ in the Maya language, and is still called so in the Huastica dialect; it is ‘oth’ in Hebrew.

“The night, or period is called ‘lailo’ in Mexican, while the Hebrew is ‘laila.’

“The idea of whiteness, or brightness, is expressed by the word ‘zack’ all over Central America, . . . the Hebrew is ‘zach.’

“The hollow of the hand, or the two hands joined together so as to hold water to drink is ‘kab,’ ro ‘kabh,’ in the Maya language; in the Hebrew it is ‘kaph.’”

“It is proper here to explain the position of spirits in the Indian systems.  All the first people are conceived as having bodies, as well as spirits.  When we speak of a spirit appearing to a sorcerer or ‘doctor,’ it is understood that the spirit has left its body temporarily and will return to it.  There are not spirits without bodies save an exceptional few who at the time of the metamorphosis of the first people lost the bodies which had belonged to them in their primal condition and received no new bodies at their fall.  This loss of bodies was inflicted as a punishment.  These desolate disembodied spirits wander about now in mountains and lonely weird places.  Uncanny in character they are seen rarely and then only by sorcerers.”

“Some of the tribes used to build an altar of twelve stones in memory of a great ancestor of theirs who had twelve sons.  They have traditions that all Indian tribes descended from one man who had twelve sons.  That this man was a notable and renowned prince, having great dominion; and that the Indians, his posterity, will yet recover the same dominion and influence.”

“William Penn says in a letter dated August 14, 1683, with reference to the Indian tribes whose territory bordered on the southwestern frontier of his settlement:  ‘As to the origin of these Indians I am ready to believe them to be of the Jewish race, I mean of the stock of the Ten Tribes.  I find them to be of the like countenance and their children of so lively a resemblance that a man would think himself in [the Jewish quarter] when he seeth them.  But this is not all; they agree in rites, they reckon by moons, they offer their first fruits, they hold a kind of feast of tabernacles, they lay their altars upon twelve stones, and they mourn their dead for a year.’” 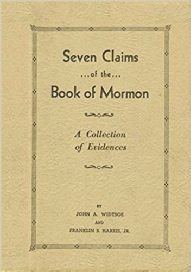 15 And after this manner of language did my father prophesy and speak unto my brethren, and also many more things which I do not write in this book; for I have written as many of them as were expedient for me in mine other book.

16 And all these things, of which I have spoken, were done as my father dwelt in a tent, in the valley of Lemuel.

17 And it came to pass after I, Nephi, having heard all the words of my father, concerning the things which he saw in a vision, and also the things which he spake by the power of the Holy Ghost, which power he received by faith on the Son of God -- and the Son of God was the Messiah who should come -- I, Nephi, was desirous also that I might see, and hear, and know of these things, by the power of the Holy Ghost, which is the gift of God unto all those who diligently seek him, as well in times of old as in the time that he should manifest himself unto the children of men.

18 For he is the same yesterday, to-day, and forever; and the way is prepared for all men from the foundation of the world, if it so be that they repent and come unto him.

20 Therefore remember, O man, for all thy doings thou shalt be brought into judgment.

21 Wherefore, if ye have sought to do wickedly in the days of your probation, then ye are found unclean before the judgment-seat of God; and no unclean thing can dwell with God; wherefore, ye must be cast off forever.

22 And the Holy Ghost giveth authority that I should speak these things, and deny them not.