A Library Tour through Alma 12

2. Now the words that Alma spake unto Zeezrom were heard by the people round about; for the multitude was great, and he spake on this wise:

3. Now Zeezrom, seeing that thou hast been taken in thy lying and craftiness, for thou hast not lied unto men only but thou hast lied unto God; for behold, he knows all thy thoughts, and thou seest that thy thoughts are made known unto us by his Spirit;

4. And thou seest that we know that thy plan was a very subtle plan, as to the subtlety of the devil, for to lie and to deceive this people that thou mightest set them against us, to revile us and to cast us out --

5. Now this was a plan of thine adversary, and he hath exercised his power in thee. Now I would that ye should remember that what I say unto thee I say unto all.

6. And behold I say unto you all that this was a snare of the adversary, which he has laid to catch this people, that he might bring you into subjection unto him, that he might encircle you about with his chains, that he might chain you down to everlasting destruction, according to the power of his captivity.

7. Now when Alma had spoken these words, Zeezrom began to tremble more exceedingly, for he was convinced more and more of the power of God; and he was also convinced that Alma and Amulek had a knowledge of him, for he was convinced that they knew the thoughts and intents of his heart; for power was given unto them that they might know of these things according to the spirit of prophecy.

8. And Zeezrom began to inquire of them diligently, that he might know more concerning the kingdom of God. And he said unto Alma: What does this mean which Amulek hath spoken concerning the resurrection of the dead, that all shall rise from the dead, both the just and the unjust, and are brought to stand before God to be judged according to their works?

9. And now Alma began to expound these things unto him, saying: It is given unto many to know the mysteries of God; nevertheless they are laid under a strict command that they shall not impart only according to the portion of his word which he doth grant unto the children of men, according to the heed and diligence which they give unto him.

11. And they that will harden their hearts, to them is given the lesser portion of the word until they know nothing concerning his mysteries; and then they are taken captive by the devil, and led by his will down to destruction. Now this is what is meant by the chains of hell.

12. And Amulek hath spoken plainly concerning death, and being raised from this mortality to a state of immortality, and being brought before the bar of God, to be judged according to our works.

13. Then if our hearts have been hardened, yea, if we have hardened our hearts against the word, insomuch that it has not been found in us, then will our state be awful, for then we shall be condemned.

15. But this cannot be; we must come forth and stand before him in his glory, and in his power, and in his might, majesty, and dominion, and acknowledge to our everlasting shame that all his judgments are just; that he is just in all his works, and that he is merciful unto the children of men, and that he has all power to save every man that believeth on his name and bringeth forth fruit meet for repentance.

16. And now behold, I say unto you then cometh a death, even a second death, which is a spiritual death; then is a time that whosoever dieth in his sins, as to a temporal death, shall also die a spiritual death; yea, he shall die as to things pertaining unto righteousness.

17. Then is the time when their torments shall be as a lake of fire and brimstone, whose flame ascendeth up forever and ever; and then is the time that they shall be chained down to an everlasting destruction, according to the power and captivity of Satan, he having subjected them according to his will.

18. Then, I say unto you, they shall be as though there had been no redemption made; for they cannot be redeemed according to God's justice; and they cannot die, seeing there is no more corruption.

19. Now it came to pass that when Alma had made an end of speaking these words, the people began to be more astonished;

20. But there was one Antionah, who was a chief ruler among them, came forth and said unto him: What is this that thou hast said, that man should rise from the dead and be changed from this mortal to an immortal state that the soul can never die?

21. What does the scripture mean, which saith that God placed cherubim and a flaming sword on the east of the garden of Eden, lest our first parents should enter and partake of the fruit of the tree of life, and live forever? And thus we see that there was no possible chance that they should live forever.

22. Now Alma said unto him: This is the thing which I was about to explain, now we see that Adam did fall by the partaking of the forbidden fruit, according to the word of God; and thus we see, that by his fall, all mankind became a lost and fallen people.

23. And now behold, I say unto you that if it had been possible for Adam to have partaken of the fruit of the tree of life at that time, there would have been no death, and the word would have been void, making God a liar, for he said: If thou eat thou shalt surely die.

24. And we see that death comes upon mankind, yea, the death which has been spoken of by Amulek, which is the temporal death; nevertheless there was a space granted unto man in which he might repent; therefore this life became a probationary state; a time to prepare to meet God; a time to prepare for that endless state which has been spoken of by us, which is after the resurrection of the dead.

Marilynne Todd Linford lists words used more than once in the Book of Mormon, but are not found in the Old Testament, New Testament, Pearl of Great Price, or Doctrine & Covenants.  The extensive list also includes how many times the word occurs.

“Plan” is one of the words that first caught the author’s attention.  Although it does occur five times in other Latter-day scripture, it is not found in the Bible.  The Book of Mormon uses the word “plan” 42 times, 33 of them in the Book of Alma. 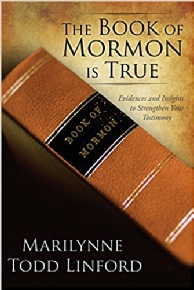 26. And now behold, if it were possible that our first parents could have gone forth and partaken of the tree of life they would have been forever miserable, having no preparatory state; and thus the plan of redemption would have been frustrated, and the word of God would have been void, taking none effect.

27. But behold, it was not so; but it was appointed unto men that they must die; and after death, they must come to judgment, even that same judgment of which we have spoken, which is the end.

28. And after God had appointed that these things should come unto man, behold, then he saw that it was expedient that man should know concerning the things whereof he had appointed unto them;

29. Therefore he sent angels to converse with them, who caused men to behold of his glory.

30. And they began from that time forth to call on his name; therefore God conversed with men, and made known unto them the plan of redemption, which had been prepared from the foundation of the world; and this he made known unto them according to their faith and repentance and their holy works.

31. Wherefore, he gave commandments unto men, they having first transgressed the first commandments as to things which were temporal, and becoming as Gods, knowing good from evil, placing themselves in a state to act, or being placed in a state to act according to their wills and pleasures, whether to do evil or to do good --

32. Therefore God gave unto them commandments, after having made known unto them the plan of redemption, that they should not do evil, the penalty thereof being a second death, which was an everlasting death as to things pertaining unto righteousness; for on such the plan of redemption could have no power, for the works of justice could not be destroyed, according to the supreme goodness of God.

33. But God did call on men, in the name of his Son, (this being the plan of redemption which was laid) saying: If ye will repent and harden not your hearts, then will I have mercy upon you, through mine Only Begotten Son;

34. Therefore, whosoever repenteth, and hardeneth not his heart, he shall have claim on mercy through mine Only Begotten Son, unto a remission of his sins; and these shall enter into my rest.

35. And whosoever will harden his heart and will do iniquity, behold, I swear in my wrath that he shall not enter into my rest.

36. And now, my brethren, behold I say unto you, that if ye will harden your hearts ye shall not enter into the rest of the Lord; therefore your iniquity provoketh him that he sendeth down his wrath upon you as in the first provocation, yea, according to his word in the last provocation as well as the first, to the everlasting destruction of your souls; therefore, according to his word, unto the last death, as well as the first.

37. And now, my brethren, seeing we know these things, and they are true, let us repent, and harden not our hearts, that we provoke not the Lord our God to pull down his wrath upon us in these his second commandments which he has given unto us; but let us enter into the rest of God, which is prepared according to his word.