A Library Tour Through

1 And now behold, it came to pass in the commencement of the fortieth year of the reign of the judges over the people of Nephi, there began to be a serious difficulty among the people of the Nephites.

2 For behold, Pahoran had died, and gone the way of all the earth; therefore there began to be a serious contention concerning who should have the judgment-seat among the brethren, who were the sons of Pahoran.

3 Now these are their names who did contend for the judgment-seat, who did also cause the people to contend: Pahoran, Paanchi, and Pacumeni.

4 Now these are not all the sons of Pahoran, (for he had many) but these are they who did contend for the judgment-seat; therefore, they did cause three divisions among the people.

5 Nevertheless, it came to pass that Pahoran was appointed by the voice of the people to be chief judge and a governor over the people of Nephi.

6 And it came to pass that Pacumeni, when he saw that he could not obtain the judgment-seat, he did unite with the voice of the people.

7 But behold, Paanchi, and that part of the people that were desirous that he should be their governor, was exceedingly wroth; therefore, he was about to flatter away those people to rise up in rebellion against their brethren.

8 And it came to pass as he was about to do this, behold, he was taken, and was tried according to the voice of the people, and condemned unto death; for he had raised up in rebellion and sought to destroy the liberty of the people.

9 Now when those people who were desirous that he should be their governor saw that he was condemned unto death, therefore they were angry, and behold, they sent forth one Kishkumen, even to the judgment-seat of Pahoran, and murdered Pahoran as he sat upon the judgment-seat.

10 And he was pursued by the servants of Pahoran; but behold, so speedy was the flight of Kishkumen that no man could overtake him.

11 And he went unto those that sent him, and they all entered into a covenant, yea, swearing by their everlasting Maker, that they would tell no man that Kishkumen had murdered Pahoran.

12 Therefore, Kishkumen was not known among the people of Nephi, for he was in disguise at the time that he murdered Pahoran. And Kishkumen and his band, who had covenanted with him, did mingle themselves among the people, in a manner that they all could not be found; but as many as were found were condemned unto death.

13 And now behold, Pacumeni was appointed, according to the voice of the people, to be a chief judge and a governor over the people, to reign in the stead of his brother Pahoran; and it was according to his right. And all this was done in the fortieth year of the reign of the judges; and it had an end.

“In working with the original manuscript, we can imagine the sorts of interactions that resulted in the actual handwritten text we see on the pages.  For example, at Helaman 1:15 Oliver hears a new name and spells it Coriantummer.  He then crosses it out and immediately writes inline the correct form Coriantumr, presumably because Joseph has spelled it for him.  The final r, however, includes a unique flourish that seems to signal his frustration with having had to guess at a name that violated the normal rules of English spelling.” – Introduction 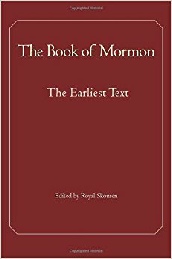 16 Therefore, the king of the Lamanites, whose name was Tubaloth, who was the son of Ammoron, supposing that Coriantumr, being a mighty man, could stand against the Nephites, with his strength and also with his great wisdom, insomuch that by sending him forth he should gain power over the Nephites --

17 Therefore he did stir them up to anger, and he did gather together his armies, and he did appoint Coriantumr to be their leader, and did cause that they should march down to the land of Zarahemla to battle against the Nephites.

18 And it came to pass that because of so much contention and so much difficulty in the government, that they had not kept sufficient guards in the land of Zarahemla; for they had supposed that the Lamanites durst not come into the heart of their lands to attack that great city Zarahemla.

19 But it came to pass that Coriantumr did march forth at the head of his numerous host, and came upon the inhabitants of the city, and their march was with such exceedingly great speed that there was no time for the Nephites to gather together their armies.

20 Therefore Coriantumr did cut down the watch by the entrance of the city, and did march forth with his whole army into the city, and they did slay every one who did oppose them, insomuch that they did take possession of the whole city.

23 And now he did not tarry in the land of Zarahemla, but he did march forth with a large army, even towards the city of Bountiful; for it was his determination to go forth and cut his way through with the sword, that he might obtain the north parts of the land.

24 And, supposing that their greatest strength was in the center of the land, therefore he did march forth, giving them no time to assemble themselves together save it were in small bodies; and in this manner they did fall upon them and cut them down to the earth.

25 But behold, this march of Coriantumr through the center of the land gave Moronihah great advantage over them, notwithstanding the greatness of the number of the Nephites who were slain.

27 But behold, the Lamanites were not frightened according to his desire, but they had come into the center of the land, and had taken the capital city which was the city of Zarahemla, and were marching through the most capital parts of the land, slaying the people with a great slaughter, both men, women, and children, taking possession of many cities and of many strongholds.

28 But when Moronihah had discovered this, he immediately sent forth Lehi with an army round about to head them before they should come to the land Bountiful

29 And thus he did; and he did head them before they came to the land Bountiful, and gave unto them battle, insomuch that they began to retreat back towards the land of Zarahemla.

30 And it came to pass that Moronihah did head them in their retreat, and did give unto them battle, insomuch that it became an exceedingly bloody battle; yea, many were slain, and among the number who were slain Coriantumr was also found.

31 And now, behold, the Lamanites could not retreat either way, neither on the north, nor on the south, nor on the east, nor on the west, for they were surrounded on every hand by the Nephites.

33 And it came to pass that Moronihah took possession of the city of Zarahemla again, and caused that the Lamanites who had been taken prisoners should depart out of the land in peace.

34 And thus ended the forty and first year of the reign of the judges.

1 And it came to pass in the forty and second year of the reign of the judges, after Moronihah had established again peace between the Nephites and the Lamanites, behold there was no one to fill the judgment-seat; therefore there began to be a contention again among the people concerning who should fill the judgment-seat.

2 And it came to pass that Helaman, who was the son of Helaman, was appointed to fill the judgment-seat, by the voice of the people.

3 But behold, Kishkumen, who had murdered Pahoran, did lay wait to destroy Helaman also; and he was upheld by his band, who had entered into a covenant that no one should know his wickedness.

4 For there was one Gadianton, who was exceedingly expert in many words, and also in his craft, to carry on the secret work of murder and of robbery; therefore he became the leader of the band of Kishkumen.

5 Therefore he did flatter them, and also Kishkumen, that if they would place him in the judgment-seat he would grant unto those who belonged to his band that they should be placed in power and authority among the people; therefore Kishkumen sought to destroy Helaman.

6 And it came to pass as he went forth towards the judgment-seat to destroy Helaman, behold one of the servants of Helaman, having been out by night, and having obtained, through disguise, a knowledge of those plans which had been laid by this band to destroy Helaman --

7 And it came to pass that he met Kishkumen, and he gave unto him a sign; therefore Kishkumen made known unto him the object of his desire, desiring that he would conduct him to the judgment-seat that he might murder Helaman.

9 Now this did please Kishkumen exceedingly, for he did suppose that he should accomplish his design; but behold, the servant of Helaman, as they were going forth unto the judgment-seat, did stab Kishkumen even to the heart, that he fell dead without a groan. And he ran and told Helaman all the things which he had seen, and heard, and done.

10 And it came to pass that Helaman did send forth to take this band of robbers and secret murderers, that they might be executed according to the law.

11 But behold, when Gadianton had found that Kishkumen did not return he feared lest that he should be destroyed; therefore he caused that his band should follow him. And they took their flight out of the land, by a secret way, into the wilderness; and thus when Helaman sent forth to take them they could nowhere be found.

12 And more of this Gadianton shall be spoken hereafter. And thus ended the forty and second year of the reign of the judges over the people of Nephi.

13 And behold, in the end of this book ye shall see that this Gadianton did prove the overthrow, yea, almost the entire destruction of the people of Nephi.