A Library Tour through

1 And now I finish my record concerning the destruction of my people, the Nephites. And it came to pass that we did march forth before the Lamanites.

2 And I, Mormon, wrote an epistle unto the king of the Lamanites, and desired of him that he would grant unto us that we might gather together our people unto the land of Cumorah, by a hill which was called Cumorah, and there we could give them battle.

3 And it came to pass that the king of the Lamanites did grant unto me the thing which I desired.

4 And it came to pass that we did march forth to the land of Cumorah, and we did pitch our tents around about the hill Cumorah; and it was in a land of many waters, rivers, and fountains; and here we had hope to gain advantage over the Lamanites.

5 And when three hundred and eighty and four years had passed away, we had gathered in all the remainder of our people unto the land of Cumorah.

6 And it came to pass that when we had gathered in all our people in one to the land of Cumorah, behold I, Mormon, began to be old; and knowing it to be the last struggle of my people, and having been commanded of the Lord that I should not suffer the records which had been handed down by our fathers, which were sacred, to fall into the hands of the Lamanites, (for the Lamanites would destroy them) therefore I made this record out of the plates of Nephi, and hid up in the hill Cumorah all the records which had been entrusted to me by the hand of the Lord, save it were these few plates which I gave unto my son Moroni.

7 And it came to pass that my people, with their wives and their children, did now behold the armies of the Lamanites marching towards them; and with that awful fear of death which fills the breasts of all the wicked, did they await to receive them.

8 And it came to pass that they came to battle against us, and every soul was filled with terror because of the greatness of their numbers.

10 And it came to pass that my men were hewn down, yea, even my ten thousand who were with me, and I fell wounded in the midst; and they passed by me that they did not put an end to my life.

11 And when they had gone through and hewn down all my people save it were twenty and four of us, (among whom was my son Moroni) and we having survived the dead of our people, did behold on the morrow, when the Lamanites had returned unto their camps, from the top of the hill Cumorah, the ten thousand of my people who were hewn down, being led in the front by me.

12 And we also beheld the ten thousand of my people who were led by my son Moroni.

13 And behold, the ten thousand of Gidgiddonah had fallen, and he also in the midst.

15 And it came to pass that there were ten more who did fall by the sword, with their ten thousand each; yea, even all my people, save it were those twenty and four who were with me, and also a few who had escaped into the south countries, and a few who had deserted over unto the Lamanites, had fallen; and their flesh, and bones, and blood lay upon the face of the earth, being left by the hands of those who slew them to molder upon the land, and to crumble and to return to their mother earth.

16 And my soul was rent with anguish, because of the slain of my people, and I cried:

18 Behold, if ye had not done this, ye would not have fallen. But behold, ye are fallen, and I mourn your loss.

19 O ye fair sons and daughters, ye fathers and mothers, ye husbands and wives, ye fair ones, how is it that ye could have fallen!

20 But behold, ye are gone, and my sorrows cannot bring your return.

21 And the day soon cometh that your mortal must put on immortality, and these bodies which are now moldering in corruption must soon become incorruptible bodies; and then ye must stand before the judgment-seat of Christ to be judged according to your works and if it so be that ye are righteous, then are ye blessed with your fathers who have gone before you.

22 O that ye had repented before this great destruction had come upon you. But behold, ye are gone, and the Father, yea, the Eternal Father of heaven, knoweth your state; and he doeth with you according to his justice and mercy.

1 And now, behold, I would speak somewhat unto the remnant of this people who are spared, if it so be that God may give unto them my words, that they may know of the things of their fathers; yea, I speak unto you, ye remnant of the house of Israel; and these are the words which I speak:

2 Know ye that ye are of the house of Israel.

3 Know ye that ye must come unto repentance, or ye cannot be saved.

4 Know ye that ye must lay down your weapons of war, and delight no more in the shedding of blood, and take them not again, save it be that God shall command you.

5 Know ye that ye must come to the knowledge of your fathers, and repent of all your sins and iniquities, and believe in Jesus Christ, that he is the Son of God, and that he was slain by the Jews, and by the power of the Father he hath risen again, whereby he hath gained the victory over the grave; and also in him is the sting of death swallowed up.

Dr. Duke discusses a number of longer parallels which have not necessarily been identified by other Book of Mormon researchers.  “Many are created by the use of repetitious words or phrases, burt they have a certain freeform poetic character that sets them apart from other types of parallelistic expressions.  They are often very beautiful in tone and language, and many have become favorite passages of people who read the Book of Mormon frequently.  We regard these passages as having special literary worth, and commend them to the reader as further evidence that the Book of Mormon was created as a great literary treasure by its prophetic authors.”

He presents several of these longer passages, then lists many more for the reader’s own research.

Know ye that ye are of the house of Israel.

Know ye that ye must come unto repentance, or ye cannot be saved.

Know ye that ye must lay down your weapons of war . . .

Know ye that ye must come to the knowledge of your fathers . . . 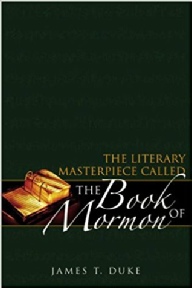 6 And he bringeth to pass the resurrection of the dead, whereby man must be raised to stand before his judgment-seat.

7 And he hath brought to pass the redemption of the world, whereby he that is found guiltless before him at the judgment day hath it given unto him to dwell in the presence of God in his kingdom, to sing ceaseless praises with the choirs above, unto the Father, and unto the Son, and unto the Holy Ghost, which are one God, in a state of happiness which hath no end.

8 Therefore repent, and be baptized in the name of Jesus, and lay hold upon the gospel of Christ, which shall be set before you, not only in this record but also in the record which shall come unto the Gentiles from the Jews, which record shall come from the Gentiles unto you.

“The Book of Mormon – like the Bible in many respects – is a book of Life.  It deals with the history of nations over a period of hundreds of hears and therefore contains a great number of vital experiences, political and spiritual, individual and national, social and ethical, pleasant and painful.  Through and behind these significant and vital experiences we behold God at work, making known his character, will, and designs to his earthly children.  In short, we may say that the Book of Mormon is a book of life because it faithfully records and interprets life situations in the long history of religious peoples, and simply and effectively presents a revelation of how God works with man.” – Sydney B. Sperry 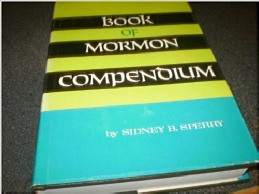 10 And ye will also know that ye are a remnant of the seed of Jacob; therefore ye are numbered among the people of the first covenant; and if it so be that ye believe in Christ, and are baptized, first with water, then with fire and with the Holy Ghost, following the example of our Savior, according to that which he hath commanded us, it shall be well with you in the day of judgment. Amen.