An Artistic Tour Through 1 Nephi 18 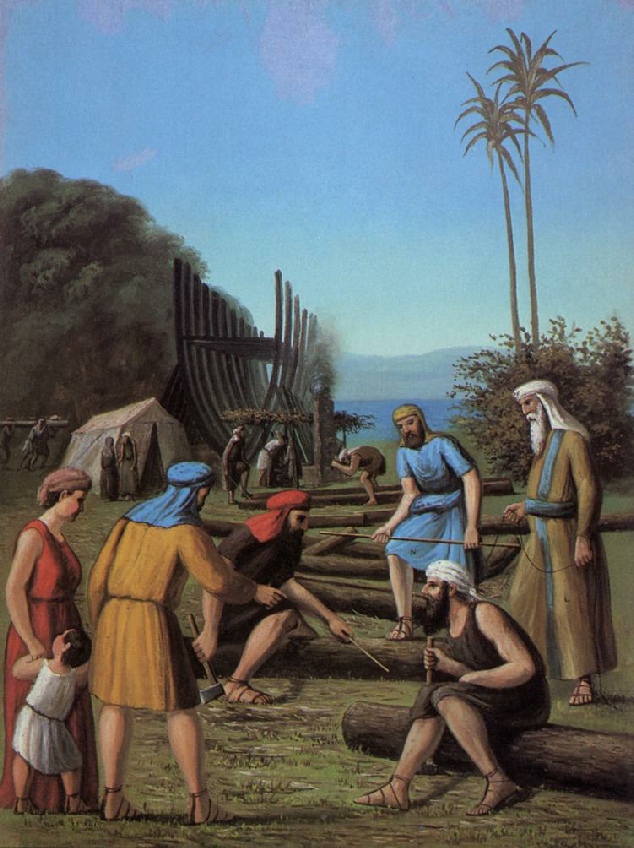 The Building of the Ship

After the party reached the seashore, God commanded Nephi to construct a ship, incorporating an unusual design. Despite the skepticism of his brothers, the ship was successfully completed.

The strong, simple, straightforward style of Christensen is reminiscent of the art of the early Renaissance, before artificially graceful and contrived poses for the human figure became important.

Nephi was successful in building the boat to carry his family to the promised land, as he knew he would be, because he was instructed of the Lord, and followed those directions.

Front Porch Acappella presents an informal mashup of this song, preparing for a ward event. 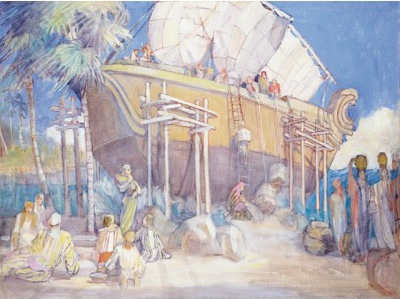 “The ship that will carry Lehi’s family to the promised land fills the center of the picture. The scene is calm and purposeful, with the men hoisting provisions and the women waiting to board. At the right, three graceful women carrying jars resemble a row of Greek statues, while a woman at the left holds her child in a pose like a madonna. As the artist developed the final version of the scene, she added distinctive details of “curious workmanship” to the ship (1 Nephi 18:1), including an unusual prow and sails sewn together from many small pieces of fabric. Although propped firmly in place, the ship leans toward rough seas. Its sails billow lightly as though it is about to move toward the clouds beyond the horizon–a foreshadowing that the faith impelling the family to build a ship and sail it to an unknown land will be tested.” 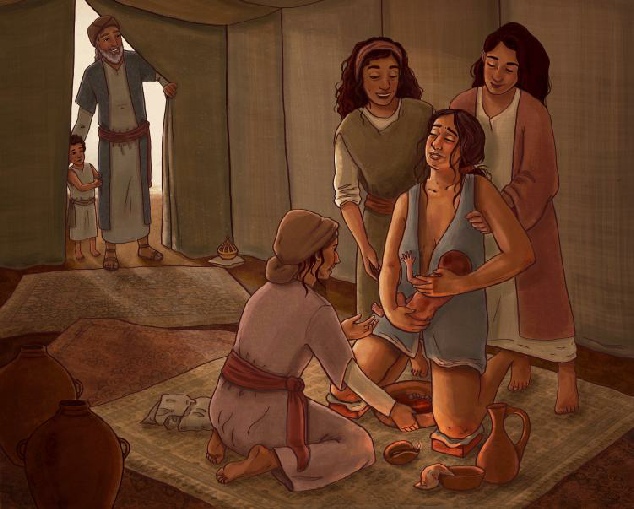 Birth of Joseph in the Wilderness

“And now, my father had begat two sons in the wilderness; the elder was called Jacob and the younger Joseph.” - 1 Nephi 18:7

Having recently become a mother myself, these verses made a much greater impact on me during my most recent reading of the Book of Mormon than ever before. Women in scripture are often background characters (when mentioned at all), so passages like these are precious even though they are short and simple. I greatly admire the strength of Sariah and the Nephite women, and I love the image of these few women banding together to support and minister to each other through their trials. The birth of their children, while very difficult, would have also been some of the moments of greatest joy during these years in the wilderness. 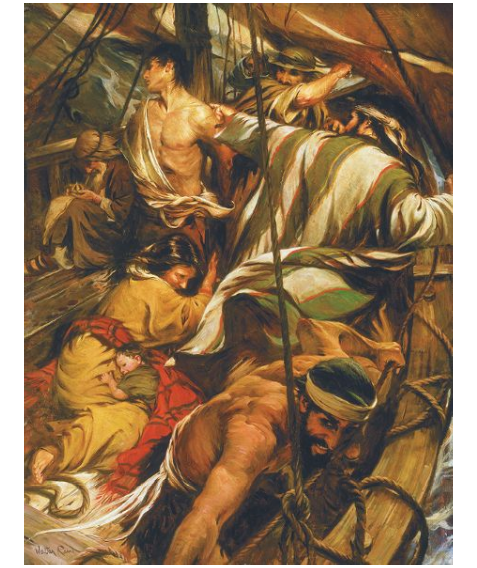 They Did Treat Me with Much Harshness

While on their trans-oceanic voyage, Nephi’s brothers became rude.  When he chastised them, the Book of Mormon records, “And it came to pass that Laman and Lemuel did take me and bind me with cords, and they did treat me with much harshness; nevertheless, the Lord did suffer it that he might show forth his power, unto the fulfilling of his word which he had spoken concerning the wicked.”

The Spirit of Prayer 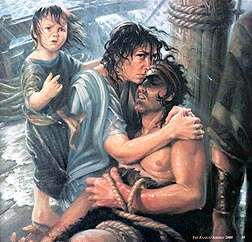 The wife of Nephi was a woman of courage and compassion. Here she comforts Nephi, who was bound with cords on the ship by his rebellious brothers (see 1 Ne. 18:11, 19–20). 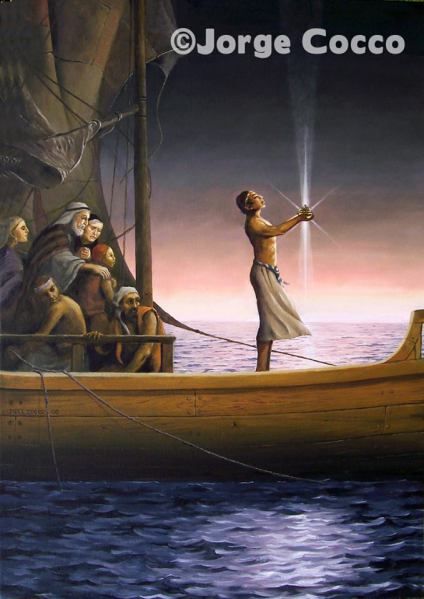 Lehi’s family has arrived in the Promised Land – America.  The rest of the Book of Mormon describes the spiritual history of this great civilization until its downfall a thousand years later.  The Lord delivered this record to our civilization by an angel, and we can read about and learn from these people, and their triumphs and failures. 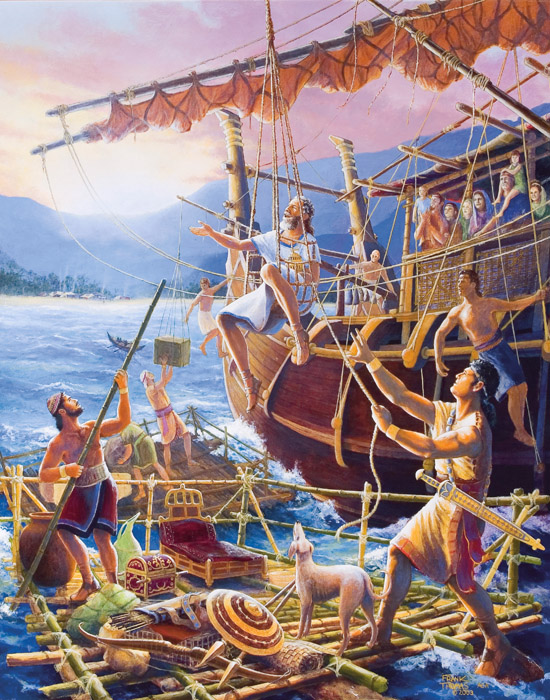 Dawn of a Promised Land 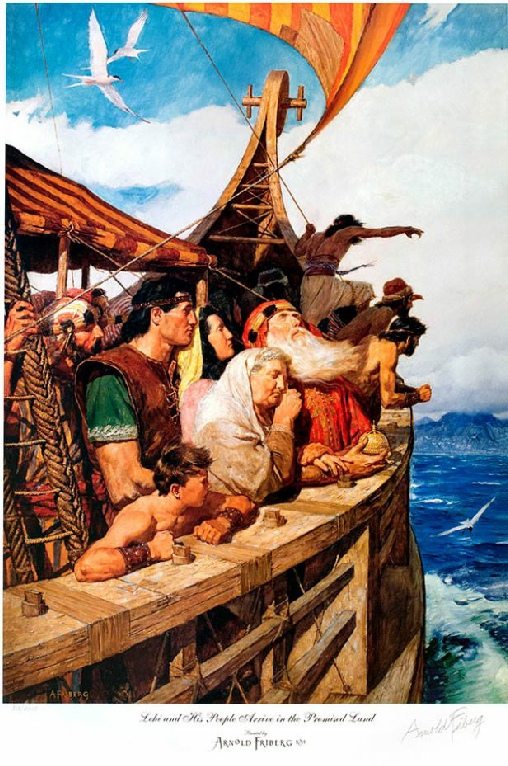 Lehi and His People Arrive in the Promised Land

After troubles upon the water, Lehi’s family finally arrives at the Promised Land, where they will settle and grow and spread.

The question when painting LEHI AND HIS PEOPLE ARRIVE IN THE PROMISED LAND was, how to picture Nephi’s ship. In the Book of Mormon we read the puzzling words that it was not built after the manner of men. So what did it look like? Again, Mr. Words can duck, but Mr. Pictures can’t. He must paint something that somehow satisfies us as looking real and reasonable. Faced with this decision, I reasoned that God, who works by natural laws, not in defiance of them, isn’t going to instruct Nephi to build a bizarre oddity defying all engineering logic, just to be different from man’s usual designs. Just to conjecture, God’s instructions to Nephi might have revealed something merely in advance of its time, unknown in that period of ship building. Possibly such a simple thing as the steering rudder, not yet invented in Nephi’s time, might have made his ship “not after the manner of men.” At least we may be sure that they did have sails. For we are told they “were driven forth before the wind.”

In the picture of the ship’s arrival in the promised land, I added a bit of interesting detail: the flying birds are not seagulls. They are the swallow-tailed Roseate Terns, included because they are found in the waters off Central America, thus adding a touch of geographical authenticity without trying to pinpoint any precise location. In the painting, Father Lehi holds the sacred Liahona in his hands. It is the symbol of the Lord’s fulfilled promise to His people. Illustrating as it does the Book of Mormon, this picture may rightly be labeled as “religious art.” Yet, far from expressing mere piety, it is filled with the bursting excitement of an adventure story, bringing to our ears the joyous cry of “Land Ho!” The sacred Liahona held by Lehi has fulfilled the Lord’s promise to His people, and has truly led them to the shores of the promised-land. 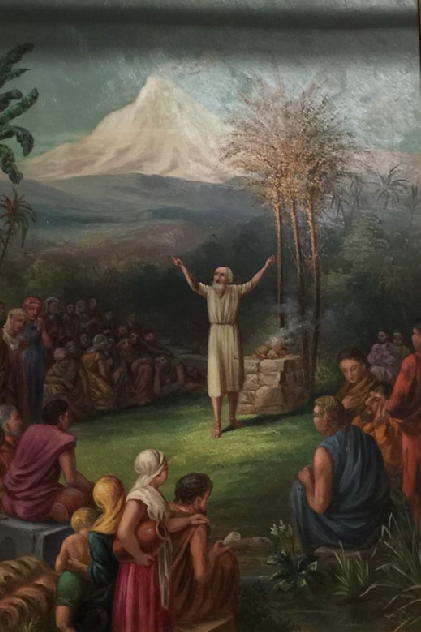 Arrival on the Promised Land 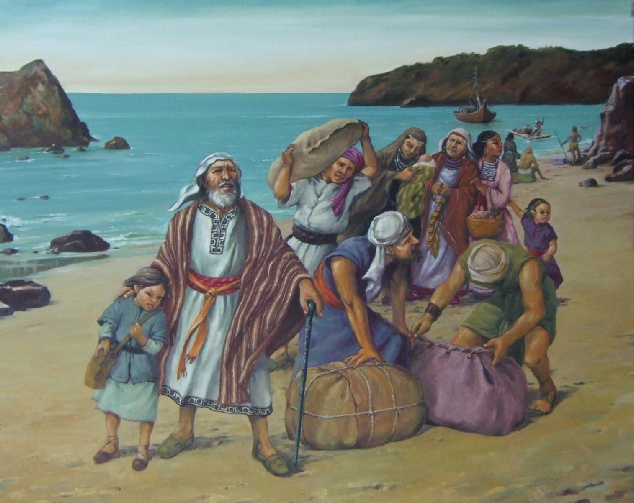 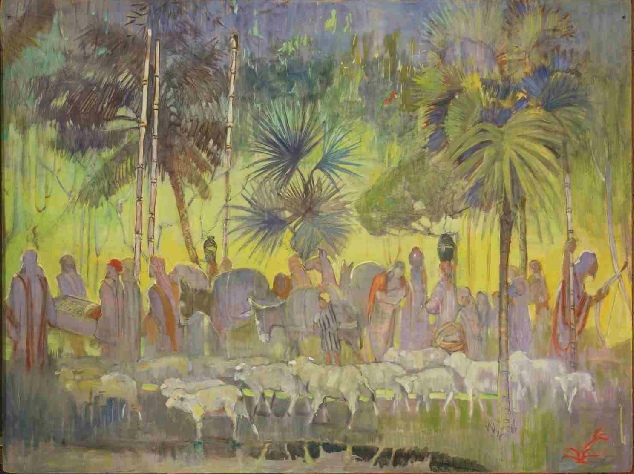 The Book of Mormon records the joy and excitement when Lehi’s family began to explore their new home, the Promised Land, which we now call America.