A Library Tour through 1 Nephi 4

1 And it came to pass that I spake unto my brethren, saying: Let us go up again unto Jerusalem, and let us be faithful in keeping the commandments of the Lord; for behold he is mightier than all the earth, then why not mightier than Laban and his fifty, yea, or even than his tens of thousands?

3 Now behold ye know that this is true; and ye also know that an angel hath spoken unto you; wherefore can ye doubt? Let us go up; the Lord is able to deliver us, even as our fathers, and to destroy Laban, even as the Egyptians.

4 Now when I had spoken these words, they were yet wroth, and did still continue to murmur; nevertheless they did follow me up until we came without the walls of Jerusalem.

5 And it was by night; and I caused that they should hide themselves without the walls. And after they had hid themselves, I, Nephi, crept into the city and went forth towards the house of Laban.

6 And I was led by the Spirit, not knowing beforehand the things which I should do.

7 Nevertheless I went forth, and as I came near unto the house of Laban I beheld a man, and he had fallen to the earth before me, for he was drunken with wine.

8 And when I came to him I found that it was Laban.

9 And I beheld his sword, and I drew it forth from the sheath thereof; and the hilt thereof was of pure gold, and the workmanship thereof was exceedingly fine, and I saw that the blade thereof was of the most precious steel.

10 And it came to pass that I was constrained by the Spirit that I should kill Laban; but I said in my heart: Never at any time have I shed the blood of man. And I shrunk and would that I might not slay him.

11 And the Spirit said unto me again: Behold the Lord hath delivered him into thy hands. Yea, and I also knew that he had sought to take away mine own life; yea, and he would not hearken unto the commandments of the Lord; and he also had taken away our property.

12 And it came to pass that the Spirit said unto me again: Slay him, for the Lord hath delivered him into thy hands;

13 Behold the Lord slayeth the wicked to bring forth his righteous purposes. It is better that one man should perish than that a nation should dwindle and perish in unbelief.

14 And now, when I, Nephi, had heard these words, I remembered the words of the Lord which he spake unto me in the wilderness, saying that: Inasmuch as thy seed shall keep my commandments, they shall prosper in the land of promise.

15 Yea, and I also thought that they could not keep the commandments of the Lord according to the law of Moses, save they should have the law.

16 And I also knew that the law was engraven upon the plates of brass.

17 And again, I knew that the Lord had delivered Laban into my hands for this cause -- that I might obtain the records according to his commandments.

18 Therefore I did obey the voice of the Spirit, and took Laban by the hair of the head, and I smote off his head with his own sword.

19 And after I had smitten off his head with his own sword, I took the garments of Laban and put them upon mine own body; yea, even every whit; and I did gird on his armor about my loins.

21 And he supposed me to be his master, Laban, for he beheld the garments and also the sword girded about my loins.

22 And he spake unto me concerning the elders of the Jews, he knowing that his master, Laban, had been out by night among them.

23 And I spake unto him as if it had been Laban.

24 And I also spake unto him that I should carry the engravings, which were upon the plates of brass, to my elder brethren, who were without the walls.

25 And I also bade him that he should follow me.

26 And he, supposing that I spake of the brethren of the church, and that I was truly that Laban whom I had slain, wherefore he did follow me.

27 And he spake unto me many times concerning the elders of the Jews, as I went forth unto my brethren, who were without the walls.

28 And it came to pass that when Laman saw me he was exceedingly frightened, and also Lemuel and Sam. And they fled from before my presence; for they supposed it was Laban, and that he had slain me and had sought to take away their lives also.

29 And it came to pass that I called after them, and they did hear me; wherefore they did cease to flee from my presence.

30 And it came to pass that when the servant of Laban beheld my brethren he began to tremble, and was about to flee from before me and return to the city of Jerusalem.

31 And now I, Nephi, being a man large in stature, and also having received much strength of the Lord, therefore I did seize upon the servant of Laban, and held him, that he should not flee.

33 And I spake unto him, even with an oath, that he need not fear; that he should be a free man like unto us if he would go down in the wilderness with us.

34 And I also spake unto him, saying: Surely the Lord hath commanded us to do this thing; and shall we not be diligent in keeping the commandments of the Lord? Therefore, if thou wilt go down into the wilderness to my father thou shalt have place with us.

52 Life-changing Questions from the Book of Mormon

[excerpt from] Question #2:  Shall we not be diligent in keeping the commandments of the Lord?

Nephi didn’t ask only, “Shouldn’t we keep the commandment?”  He asked, “Shall we not be diligent in keeping the commandments of the Lord?”  Noah Webster’s 1828 American Dictionary of the English Language is very helpful because its definitions of words are contemporary to the time of the translation of the Book of Mormon.  The 1828 dictionary defines diligent as “constant in effort or exertion to accomplish what is undertaken.”  Thus our goal isn’t just to keep the commandments sporadically but to be constant in our efforts to do so.

We live in a time when obedience to commandments is not a high priority for many people.  Some do not believe commandments exist, and, as Elder D. Todd Christofferson has said, “Sadly, much of modern Christianity does not acknowledge that God makes any real demands on those hwo believe in Him.”  Too many people in the world see God as a kind of butler who serves them when summoned or a therapist who makes them feel good about themselves.  The titles of recent books by Christian authors seem to verify this perspective, for example, The Pressure’s Off:  Breaking Free from Rules and Performance and Gospel of Yes.  Elder Neal A. Maxwell was correct when he stated that people seem to “demand an undemanding God.”

If we view God’s requirements as being too much to ask, maybe it is because we do not yet see through His eyes.  A God who asks nothing of us is making nothing of us, and that is not the case with our God.  Everyone struggles occasionally to “obey with exactness” (Alma 57:21).  But Nephi’s question can be a powerful reminder to us to be diligent in or be constant in our efforts to keep God’s commandments.

In this book, the authors examine briefly the power of questions:

“Elder Neal A. Maxwell said, ‘The restored gospel of Jesus Christ gives us abundant answers.  But Jesus also asked some searching questions which tell us even more about the stretching journey of discipleship.’

“’The power of a good question is of inestimable worth,’ wrote Elder Tad R. Callister.  ‘It is like an . . . alarm clock that awakens us out of our mental doldrums.  It is a catalyst that jumpstarts our mental engines.’ . . . 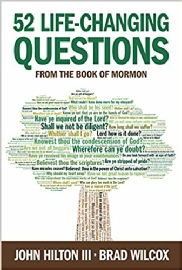 35 And it came to pass that Zoram did take courage at the words which I spake. Now Zoram was the name of the servant; and he promised that he would go down into the wilderness unto our father. Yea, and he also made an oath unto us that he would tarry with us from that time forth.

36 Now we were desirous that he should tarry with us for this cause, that the Jews might not know concerning our flight into the wilderness, lest they should pursue us and destroy us.

37 And it came to pass that when Zoram had made an oath unto us, our fears did cease concerning him.

38 And it came to pass that we took the plates of brass and the servant of Laban, and departed into the wilderness, and journeyed unto the tent of our father.