A Library Tour through 1 Nephi 1-2

1 I, Nephi, having been born of goodly parents, therefore I was taught somewhat in all the learning of my father; and having seen many afflictions in the course of my days, nevertheless, having been highly favored of the Lord in all my days; yea, having had a great knowledge of the goodness and the mysteries of God, therefore I make a record of my proceedings in my days.

4 For it came to pass in the commencement of the first year of the reign of Zedekiah, king of Judah, (my father, Lehi, having dwelt at Jerusalem in all his days); and in that same year there came many prophets, prophesying unto the people that they must repent, or the great city Jerusalem must be destroyed.

5 Wherefore it came to pass that my father, Lehi, as he went forth prayed unto the Lord, yea, even with all his heart, in behalf of his people.

6 And it came to pass as he prayed unto the Lord, there came a pillar of fire and dwelt upon a rock before him; and he saw and heard much; and because of the things which he saw and heard he did quake and tremble exceedingly.

7 And it came to pass that he returned to his own house at Jerusalem; and he cast himself upon his bed, being overcome with the Spirit and the things which he had seen.

8 And being thus overcome with the Spirit, he was carried away in a vision, even that he saw the heavens open, and he thought he saw God sitting upon his throne, surrounded with numberless concourses of angels in the attitude of singing and praising their God.

9 And it came to pass that he saw One descending out of the midst of heaven, and he beheld that his luster was above that of the sun at noon-day.

10 And he also saw twelve others following him, and their brightness did exceed that of the stars in the firmament.

11 And they came down and went forth upon the face of the earth; and the first came and stood before my father, and gave unto him a book, and bade him that he should read.

12 And it came to pass that as he read, he was filled with the Spirit of the Lord.

13 And he read, saying: Wo, wo, unto Jerusalem, for I have seen thine abominations! Yea, and many things did my father read concerning Jerusalem -- that it should be destroyed, and the inhabitants thereof; many should perish by the sword, and many should be carried away captive into Babylon.

14 And it came to pass that when my father had read and seen many great and marvelous things, he did exclaim many things unto the Lord; such as: Great and marvelous are thy works, O Lord God Almighty! Thy throne is high in the heavens, and thy power, and goodness, and mercy are over all the inhabitants of the earth, and, because thou art merciful, thou wilt not suffer those who come unto thee that they shall perish!

15 And after this manner was the language of my father in the praising of his God; for his soul did rejoice, and his whole heart was filled, because of the things which he had seen, yea, which the Lord had shown unto him.

18 Therefore, I would that ye should know, that after the Lord had shown so many marvelous things unto my father, Lehi, yea, concerning the destruction of Jerusalem, behold he went forth among the people, and began to prophesy and to declare unto them concerning the things which he had both seen and heard.

20 And when the Jews heard these things they were angry with him; yea, even as with the prophets of old, whom they had cast out, and stoned, and slain; and they also sought his life, that they might take it away. But behold, I, Nephi, will show unto you that the tender mercies of the Lord are over all those whom he hath chosen, because of their faith, to make them mighty even unto the power of deliverance.

1 For behold, it came to pass that the Lord spake unto my father, yea, even in a dream, and said unto him: Blessed art thou Lehi, because of the things which thou hast done; and because thou hast been faithful and declared unto this people the things which I commanded thee, behold, they seek to take away thy life.

2 And it came to pass that the Lord commanded my father, even in a dream, that he should take his family and depart into the wilderness.

3 And it came to pass that he was obedient unto the word of the Lord, wherefore he did as the Lord commanded him.

6 And it came to pass that when he had traveled three days in the wilderness, he pitched his tent in a valley by the side of a river of water.

7 And it came to pass that he built an altar of stones, and made an offering unto the Lord, and gave thanks unto the Lord our God.

8 And it came to pass that he called the name of the river, Laman, and it emptied into the Red Sea; and the valley was in the borders near the mouth thereof.

10 And he also spake unto Lemuel: O that thou mightest be like unto this valley, firm and steadfast, and immovable in keeping the commandments of the Lord!

11 Now this he spake because of the stiffneckedness of Laman and Lemuel; for behold they did murmur in many things against their father, because he was a visionary man, and had led them out of the land of Jerusalem, to leave the land of their inheritance, and their gold, and their silver, and their precious things, to perish in the wilderness. And this they said he had done because of the foolish imaginations of his heart.

12 And thus Laman and Lemuel, being the eldest, did murmur against their father. And they did murmur because they knew not the dealings of that God who had created them.

13 Neither did they believe that Jerusalem, that great city, could be destroyed according to the words of the prophets. And they were like unto the Jews who were at Jerusalem, who sought to take away the life of my father.

14 And it came to pass that my father did speak unto them in the valley of Lemuel, with power, being filled with the Spirit, until their frames did shake before him. And he did confound them, that they durst not utter against him; wherefore, they did as he commanded them.

16 And it came to pass that I, Nephi, being exceedingly young, nevertheless being large in stature, and also having great desires to know of the mysteries of God, wherefore, I did cry unto the Lord; and behold he did visit me, and did soften my heart that I did believe all the words which had been spoken by my father; wherefore, I did not rebel against him like unto my brothers.

17 And I spake unto Sam, making known unto him the things which the Lord had manifested unto me by his Holy Spirit. And it came to pass that he believed in my words.

18 But, behold, Laman and Lemuel would not hearken unto my words; and being grieved because of the hardness of their hearts I cried unto the Lord for them.

19 And it came to pass that the Lord spake unto me, saying: Blessed art thou, Nephi, because of thy faith, for thou hast sought me diligently, with lowliness of heart.

The Book of Mormon Is True – Evidences and Insights to Strengthen Your Testimony, by Marilynne Todd Linford

When I began to study a new foreign language, I commenced reading the Book of Mormon in that language.  I read one new verse per day, and looked up one new word in that new verse.  As I began, I noticed that (knowing the story, of course) I could pick up the gist of what the verse was saying.  If I didn’t actually know a word, I could often identify a root within it.  I was moving along quite well.

However, when I came to this verse, the flow abruptly changed.  It was as though I was reading a different, new foreign language.  I realized that the speaker had changed.  It was no longer Nephi relating the events, but God speaking to him.

What I noticed anecdotally in my foreign language reading is the well-developed treatise of Marilynne Todd Linford’s book of lists and word explorations, discovering how different is the vocabulary of the 50+ speakers of the Book of Mormon. 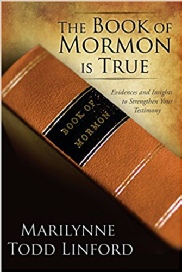 20 And inasmuch as ye shall keep my commandments, ye shall prosper, and shall be led to a land of promise; yea, even a land which I have prepared for you; yea, a land which is choice above all other lands.

21 And inasmuch as thy brethren shall rebel against thee, they shall be cut off from the presence of the Lord.

22 And inasmuch as thou shalt keep my commandments, thou shalt be made a ruler and a teacher over thy brethren.

24 And if it so be that they rebel against me, they shall be a scourge unto thy seed, to stir them up in the ways of remembrance.