1 And it shall come to pass, that if the Gentiles shall hearken unto the Lamb of God in that day that he shall manifest himself unto them in word, and also in power, in very deed, unto the taking away of their stumbling blocks --

5 And it came to pass that the angel spake unto me, Nephi, saying: Thou hast beheld that if the Gentiles repent it shall be well with them; and thou also knowest concerning the covenants of the Lord unto the house of Israel; and thou also hast heard that whoso repenteth not must perish.

6 Therefore, wo be unto the Gentiles if it so be that they harden their hearts against the Lamb of God.

7 For the time cometh, saith the Lamb of God, that I will work a great and a marvelous work among the children of men; a work which shall be everlasting, either on the one hand or on the other -- either to the convincing of them unto peace and life eternal, or unto the deliverance of them to the hardness of their hearts and the blindness of their minds unto their being brought down into captivity, and also into destruction, both temporally and spiritually, according to the captivity of the devil, of which I have spoken.

8 And it came to pass that when the angel had spoken these words, he said unto me: Rememberest thou the covenants of the Father unto the house of Israel? I said unto him, Yea.

9 And it came to pass that he said unto me: Look, and behold that great and abominable church, which is the mother of abominations, whose founder is the devil.

The Things Which My Father Saw:  Approaches to Lehi’s Dream and Nephi’s Vision.  The 40th Annual Brigham Young University Sidney B. Sperry symposium 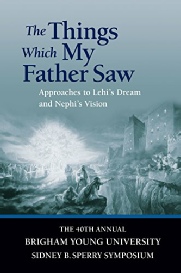 11 And it came to pass that I looked and beheld the whore of all the earth, and she sat upon many waters; and she had dominion over all the earth, among all nations, kindreds, tongues, and people.

12 And it came to pass that I beheld the church of the Lamb of God, and its numbers were few, because of the wickedness and abominations of the whore who sat upon many waters; nevertheless, I beheld that the church of the Lamb, who were the saints of God, were also upon all the face of the earth; and their dominions upon the face of the earth were small, because of the wickedness of the great whore whom I saw.

13 And it came to pass that I beheld that the great mother of abominations did gather together multitudes upon the face of all the earth, among all the nations of the Gentiles, to fight against the Lamb of God.

14 And it came to pass that I, Nephi, beheld the power of the Lamb of God, that it descended upon the saints of the church of the Lamb, and upon the covenant people of the Lord, who were scattered upon all the face of the earth; and they were armed with righteousness and with the power of God in great glory.

15 And it came to pass that I beheld that the wrath of God was poured out upon that great and abominable church, insomuch that there were wars and rumors of wars among all the nations and kindreds of the earth.

16 And as there began to be wars and rumors of wars among all the nations which belonged to the mother of abominations, the angel spake unto me, saying: Behold, the wrath of God is upon the mother of harlots; and behold, thou seest all these things --

17 And when the day cometh that the wrath of God is poured out upon the mother of harlots, which is the great and abominable church of all the earth, whose founder is the devil, then, at that day, the work of the Father shall commence, in preparing the way for the fulfilling of his covenants, which he hath made to his people who are of the house of Israel.

18 And it came to pass that the angel spake unto me, saying: Look!

19 And I looked and beheld a man, and he was dressed in a white robe.

20 And the angel said unto me: Behold one of the twelve apostles of the Lamb.

21 Behold, he shall see and write the remainder of these things; yea, and also many things which have been.

22 And he shall also write concerning the end of the world.

25 But the things which thou shalt see hereafter thou shalt not write; for the Lord God hath ordained the apostle of the Lamb of God that he should write them.

26 And also others who have been, to them hath he shown all things, and they have written them; and they are sealed up to come forth in their purity, according to the truth which is in the Lamb, in the own due time of the Lord, unto the house of Israel.

27 And I, Nephi, heard and bear record, that the name of the apostle of the Lamb was John, according to the word of the angel.

29 And I bear record that I saw the things which my father saw, and the angel of the Lord did make them known unto me.

Chapter 13 – “Connections Between the Visions of Lehi and Nephi.  Research by John W. Welch, originally published as a FARMS Update in Insights (July 1993): 2.

“The two vision are very different in character.  Lehi’s dream is intimate, symbolic, and salvific; Nephi’s vision is collective historic, and eschatological.  Yet both visions embrace the same prophetic elements, only from different angles.”

Welch examines, section by section, the two visions as they develop and are recorded, pointing out the parallels throughout.

“When we set these two visions side by side, they are indeed significantly the same, element for element.  Although the casual reader might not see any connection between these two texts at first, the correlation between them is extensive and precise....

“At the same time, Nephi’s vision is not a mere rerun of Lehi’s.  The second clearly develops each element of the first, from different perspectives and for different purposes. 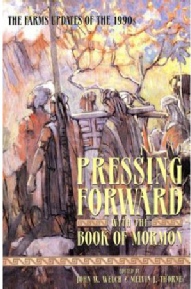 1 And it came to pass that after I, Nephi, had been carried away in the spirit, and seen all these things, I returned to the tent of my father.

2 And it came to pass that I beheld my brethren, and they were disputing one with another concerning the things my father had spoken unto them.

3 For he truly spake many great things unto them, which were hard to be understood, save a man should inquire of the Lord; and they being hard in their hearts, therefore they did not look unto the Lord as they ought.

5 And it came to pass that I was overcome because of my afflictions, for I considered that mine afflictions were great above all, because of the destruction of my people, for I had beheld their fall.

6 And it came to pass that after I had received strength I spake unto my brethren, desiring to know of them the cause of their disputations.

7 And they said: Behold, we cannot understand the words which our father hath spoken concerning the natural branches of the olive-tree, and also concerning the Gentiles.

8 And I said unto them: Have ye inquired of the Lord?

9 And they said unto me: We have not; for the Lord maketh no such thing known unto us.

11 Do ye not remember the things which the Lord hath said? -- If ye will not harden your hearts, and ask me in faith, believing that ye shall receive, with diligence in keeping my commandments, surely these things shall be made known unto you.

13 And now, the thing which our father meaneth concerning the grafting in of the natural branches through the fulness of the Gentiles, is, that in the latter days, when our seed shall have dwindled in unbelief, yea, for the space of many years, and many generations after the Messiah shall be manifested in body unto the children of men, then shall the fulness of the gospel of the Messiah come unto the Gentiles, and from the Gentiles unto the remnant of our seed --

18 Wherefore, our father hath not spoken of our seed alone, but also of all the house of Israel, pointing to the covenant which should be fulfilled in the latter days; which covenant the Lord made to our father Abraham, saying: In thy seed shall all the kindreds of the earth be blessed.

20 And I did rehearse unto them the words of Isaiah, who spake concerning the restoration of the Jews, or of the house of Israel; and after they were restored they should no more be confounded, neither should they be scattered again. And it came to pass that I did speak many words unto my brethren, that they were pacified and did humble themselves before the Lord.

21 And it came to pass that they did speak unto me again, saying: What meaneth this thing which our father saw in a dream? What meaneth the tree which he saw?

22 And I said unto them: It was a representation of the tree of life.

23 And they said unto me: What meaneth the rod of iron which our father saw, that led to the tree?

26 And they said unto me: What meaneth the river of water which our father saw?

27 And I said unto them that the water which my father saw was filthiness; and so much was his mind swallowed up in other things that he beheld not the filthiness of the water.

28 And I said unto them that it was an awful gulf, which separated the wicked from the tree of life, and also from the saints of God.

29 And I said unto them that it was a representation of that awful hell, which the angel said unto me was prepared for the wicked.

30 And I said unto them that our father also saw that the justice of God did also divide the wicked from the righteous; and the brightness thereof was like unto the brightness of a flaming fire, which ascendeth up unto God forever and ever, and hath no end.

31 And they said unto me: Doth this thing mean the torment of the body in the days of probation, or doth it mean the final state of the soul after the death of the temporal body, or doth it speak of the things which are temporal?

32 And it came to pass that I said unto them that it was a representation of things both temporal and spiritual; for the day should come that they must be judged of their works, yea, even the works which were done by the temporal body in their days of probation.

33 Wherefore, if they should die in their wickedness they must be cast off also, as to the things which are spiritual, which are pertaining to righteousness; wherefore, they must be brought to stand before God, to be judged of their works; and if their works have been filthiness they must needs be filthy; and if they be filthy it must needs be that they cannot dwell in the kingdom of God; if so, the kingdom of God must be filthy also.

34 But behold, I say unto you, the kingdom of God is not filthy, and there cannot any unclean thing enter into the kingdom of God; wherefore there must needs be a place of filthiness prepared for that which is filthy.

36 Wherefore, the wicked are rejected from the righteous, and also from that tree of life, whose fruit is most precious and most desirable above all other fruits; yea, and it is the greatest of all the gifts of God. And thus I spake unto my brethren. Amen.