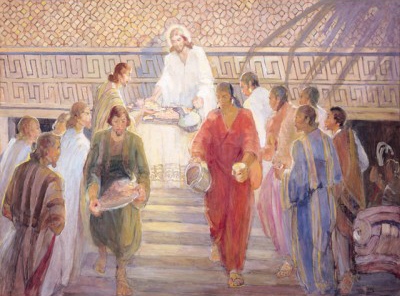 “In this painting, against the backdrop of an elaborate Meso-american temple, the resurrected Savior administers the sacrament with the help of his newly chosen leaders.” 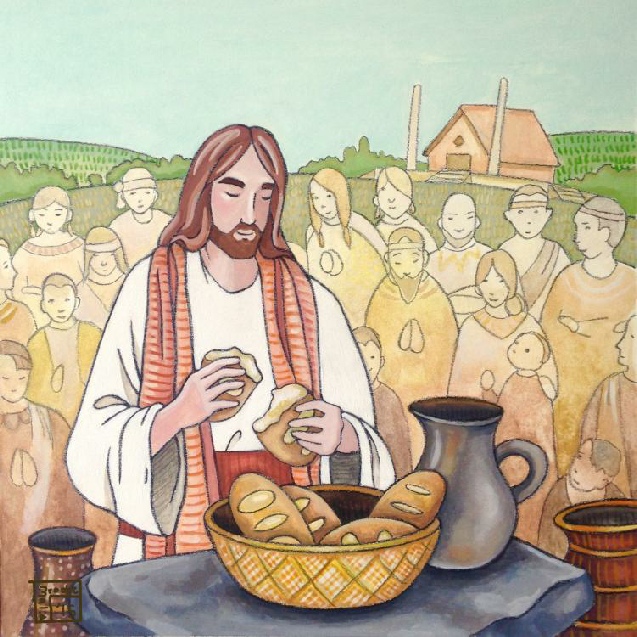 3rd Place in the 2017 Book of Mormon Central Art Contest

Brooke Malia Mann is an art teacher for individuals with mental impairments and is also a freelance illustrator. Christ’s visit to the people in the Americas is one of the most powerful scriptural accounts in the whole Book of Mormon. This piece depicts the moment when Christ administers the sacrament to the Nephites. This piece is meant to span all ages, so that even children can relate to and love the scriptures. 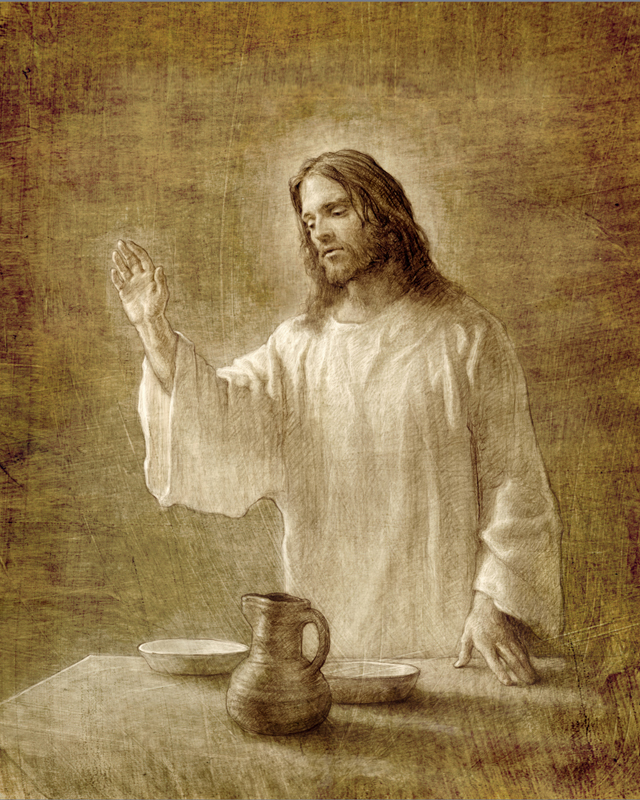 The Book of Mormon teaches that Jesus blessed the bread and wine for the people of the Promised Land, telling them, “This shall ye do in remembrance of my body, which I have shown unto you.  And it shall be a testimony unto the Father that ye do always remember me.  And if ye do always remember me, ye shall have my Spirit to be with you.”

I Was There When He Came - Marilyn Arnold and Maurine Ozment

Mormon has written some of the wondrous things that happened and things that Jesus said when He visited the people of ancient America, but the experience of the people present at that time surpasses anything that we can imagine.  They made certain to certify, individually, that He came, that He lives, and that He redeems and loves.  This song expresses some of the wonder of that supernal visit, as recorded in the Book of Mormon. 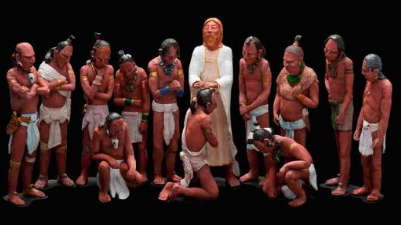 “I can almost name each piece as I form it, for its expression of solemnity almost brings out a personality that I can recognize. The scriptural source for this sculpture is 3 Nephi, chapters 12, 15, and 28, in the Book of Mormon.” 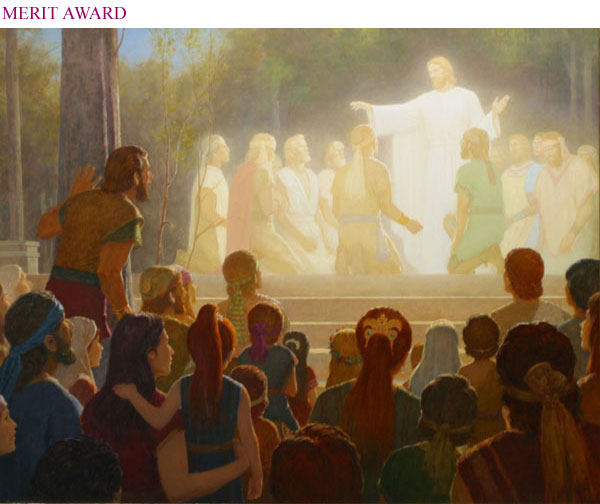 The Light of His Countenance Did Shine Upon Them 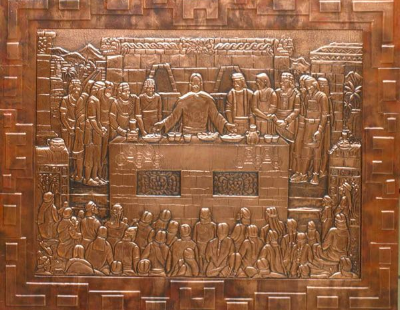 Bread of Life in the Land of Abundance

This artwork refers to the importance of the sacrament that was administered by our Lord here in the Americas.

I Will Remember the Covenant 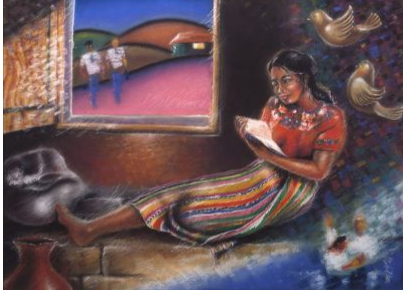 Ready for the Covenant 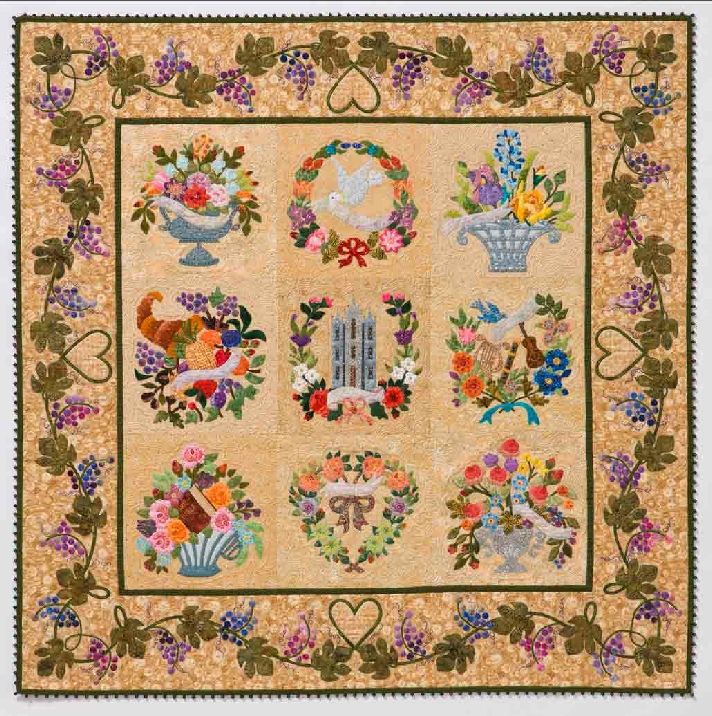 Great Are the Words of Isaiah

Scriptures from Isaiah are represented on banners in each of the nine floral blocks. The Salt Lake Temple is depicted in the center block. The grapevine border suggests abundance of life and the life of the Savior. 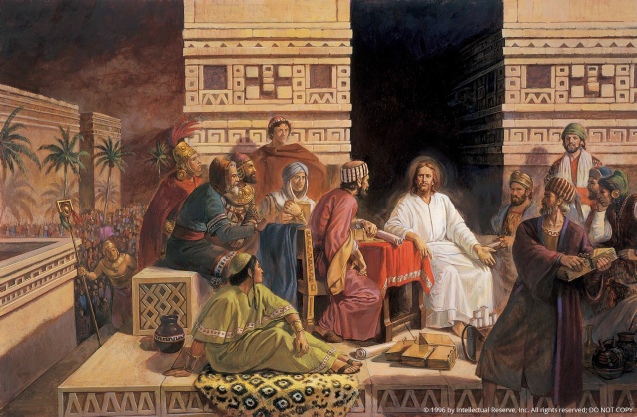 Christ Asks for the Records 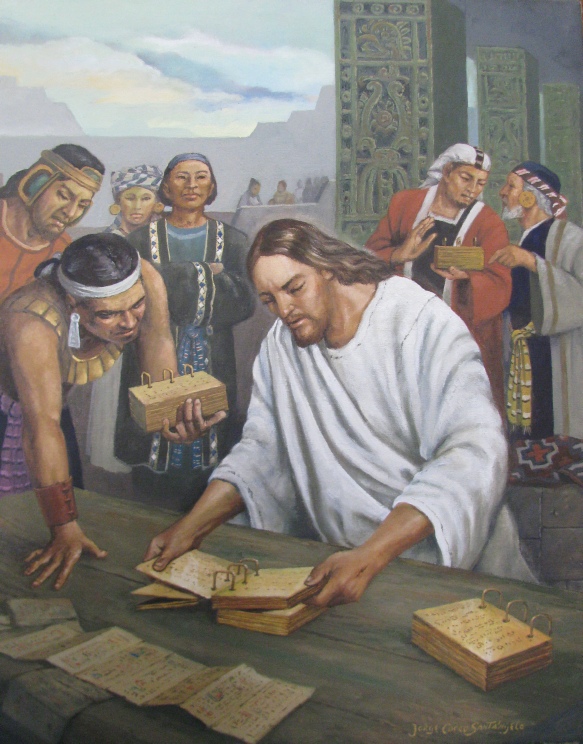 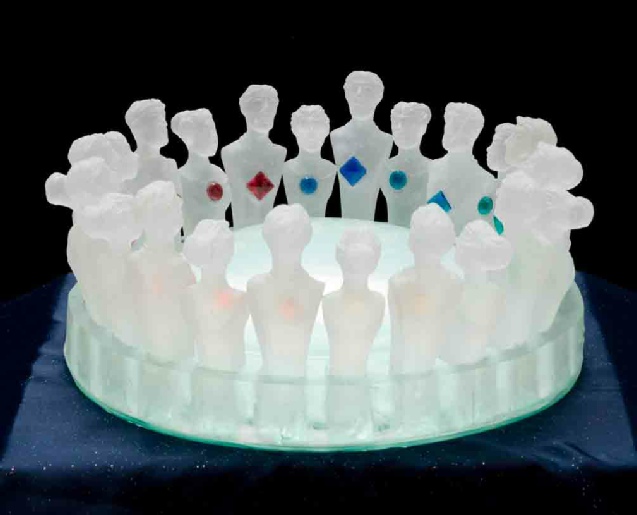 glass figures and etched glass base

Abraham sought for the blessings of the fathers, which would be the heritage of his children. Those future children were described by the Lord as stars and sands. Sand is unstable until tried through fire. Once refined, sand becomes glass. Light passing through a prism of glass is refracted into separate colors. Each tribe of Israel had a separate gem that identified it. Though the exact stone for each tribe is not known, I can see how each tribe could make up the complement of colors that join together to make white light. As each house or tribe of Israel gives their special color and gift, they create one eternal round. 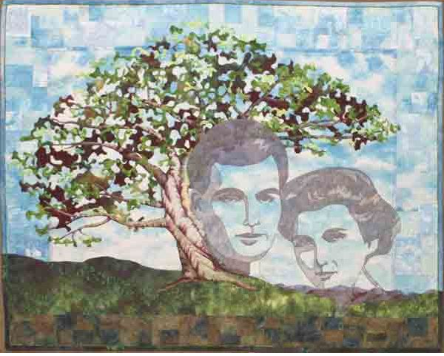 Adam and Eve began the process of mortality through which countless generations of children have been brought into the world. Lehi's vision of the Tree of Life is a beautiful symbolic representation of the linking of families through God's love, power, and priesthood ordinances found in holy temples. Latter–day Saints are acutely aware of the linking of generations and of our connection to humans as brothers and sisters who are the literal children of our Heavenly Father. In this quilt, photographs of ancestors were scanned and digitally collaged, and then printed onto fabric to create both the individuals in the portraits and the families in the border of the quilt. 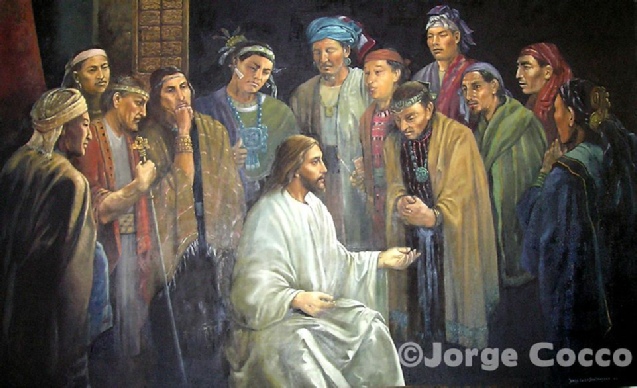 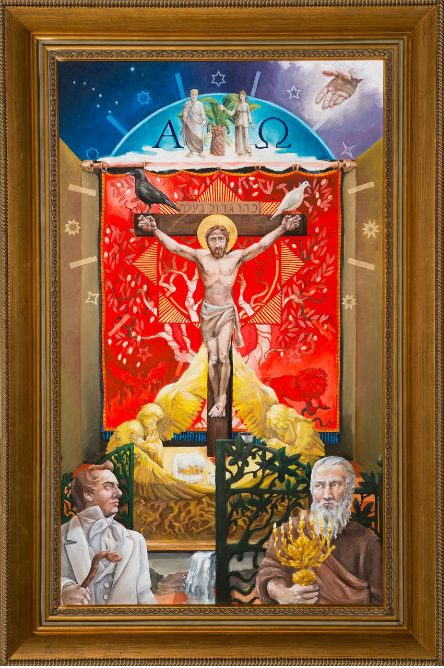 Oil on canvas on board

Paul speaks of Christ as the Great High Priest, who, instead of offering animal sacrifices, laid down His own life to provide the way for us to be brought back into God’s presence (Hebrews 4:14). He sacrificed His life upon the cross and taught that because He did so, all men can be drawn unto Him (3 Nephi 27:14). He is the Redeemer of the world, and His Atonement makes God’s eternal plan efficacious.

We Three Were Caught Up - Marilyn Arnold and Maurine Ozment

When Jesus Christ visited the people of ancient America, he chose 12 men whom He designated as disciples, to organize His church and teach the people after He again ascended into heaven.  During His time with these men, He granted unto each their own desire.  Three of them desired to live on earth until He came again, so that they could continue to serve Him and minister to the world in the flesh.  He took those three up to heaven for further instruction. 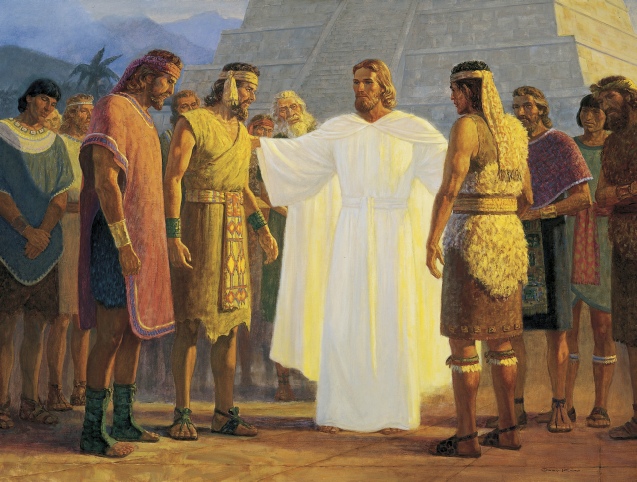 Christ with the Three Nephites 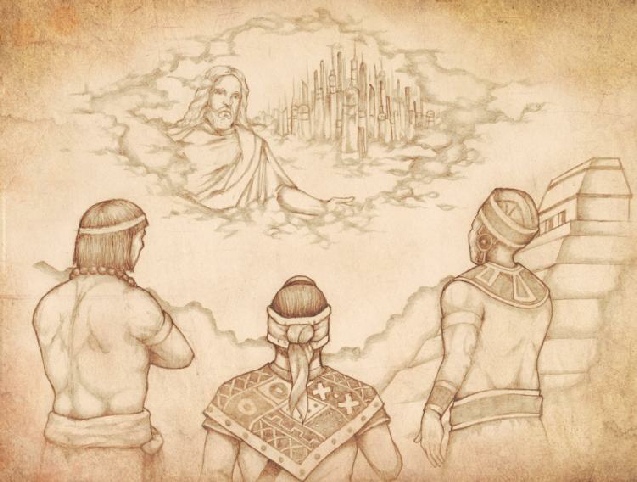