A Library Tour through

1 For behold, the day cometh that shall burn as an oven; and all the proud, yea, and all that do wickedly, shall be stubble; and the day that cometh shall burn them up, saith the Lord of Hosts, that it shall leave them neither root nor branch.

2 But unto you that fear my name, shall the Son of Righteousness arise with healing in his wings; and ye shall go forth and grow up as calves in the stall.

3 And ye shall tread down the wicked; for they shall be ashes under the soles of your feet in the day that I shall do this, saith the Lord of Hosts.

4 Remember ye the law of Moses, my servant, which I commanded unto him in Horeb for all Israel, with the statutes and judgments.

5 Behold, I will send you Elijah the prophet before the coming of the great and dreadful day of the Lord;

1 And now it came to pass that when Jesus had told these things he expounded them unto the multitude; and he did expound all things unto them, both great and small.

2 And he saith: These scriptures, which ye had not with you, the Father commanded that I should give unto you; for it was wisdom in him that they should be given unto future generations.

4 And even unto the great and last day, when all people, and all kindreds, and all nations and tongues shall stand before God, to be judged of their works, whether they be good or whether they be evil --

6 And now there cannot be written in this book even a hundredth part of the things which Jesus did truly teach unto the people;

7 But behold the plates of Nephi do contain the more part of the things which he taught the people.

8 And these things have I written, which are a lesser part of the things which he taught the people; and I have written them to the intent that they may be brought again unto this people, from the Gentiles, according to the words which Jesus hath spoken.

9 And when they shall have received this, which is expedient that they should have first, to try their faith, and if it shall so be that they shall believe these things then shall the greater things be made manifest unto them.

10 And if it so be that they will not believe these things, then shall the greater things be withheld from them, unto their condemnation.

11 Behold, I was about to write them, all which were engraven upon the plates of Nephi, but the Lord forbade it, saying: I will try the faith of my people.

13 Therefore, I would that ye should behold that the Lord truly did teach the people, for the space of three days; and after that he did show himself unto them oft, and did break bread oft, and bless it, and give it unto them.

14 And it came to pass that he did teach and minister unto the children of the multitude of whom hath been spoken, and he did loose their tongues, and they did speak unto their fathers great and marvelous things, even greater than he had revealed unto the people; and he loosed their tongues that they could utter.

15 And it came to pass that after he had ascended into heaven -- the second time that he showed himself unto them, and had gone unto the Father, after having healed all their sick, and their lame, and opened the eyes of their blind and unstopped the ears of the deaf, and even had done all manner of cures among them, and raised a man from the dead, and had shown forth his power unto them, and had ascended unto the Father --

16 Behold, it came to pass on the morrow that the multitude gathered themselves together, and they both saw and heard these children; yea, even babes did open their mouths and utter marvelous things; and the things which they did utter were forbidden that there should not any man write them.

Ten More Amazing Discoveries:  Intriguing theories and findings from the discoverer of the Valley of Lemuel and 80 other new Book of Mormon Evidences.

Chapter 6 – The Christian Martyrs of Arabia and the Book of Mormon.

This fascinating chapter recounts three Book of Mormon miracles which have no parallel in the Bible, including the children speaking marvelous things.  The story of the Christian martyrs of 523 A.D. provides a correlation with these miracles. 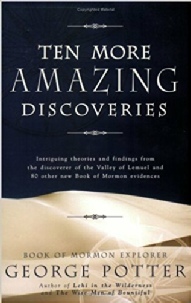 17 And it came to pass that the disciples whom Jesus had chosen began from that time forth to baptize and to teach as many as did come unto them; and as many as were baptized in the name of Jesus were filled with the Holy Ghost.

18 And many of them saw and heard unspeakable things, which are not lawful to be written.

19 And they taught, and did minister one to another; and they had all things common among them, every man dealing justly, one with another.

20 And it came to pass that they did do all things even as Jesus had commanded them.

21 And they who were baptized in the name of Jesus were called the church of Christ.