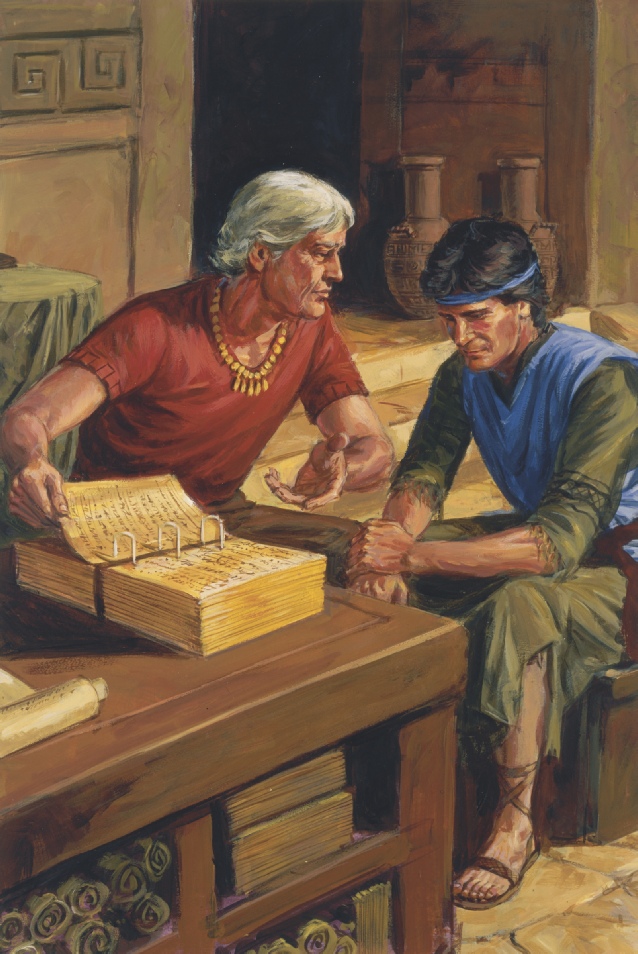 Alma the Younger Counseling His Son 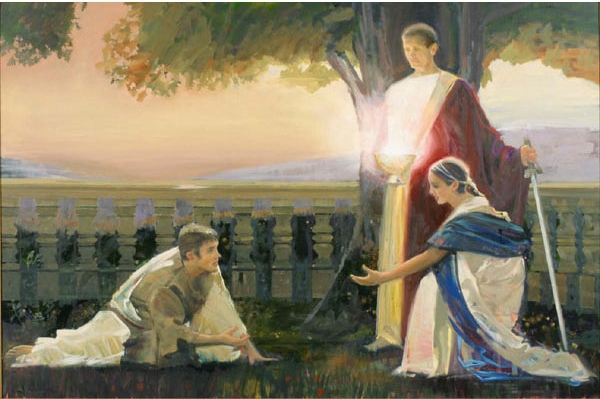 Mercy Claimeth All Which is Her Own

A personification of the role of Christ’s atonement in the relationship between mercy, justice, God, and man.  Inspired by the 42nd chapter of the Book of Alma, in the Book of Mormon 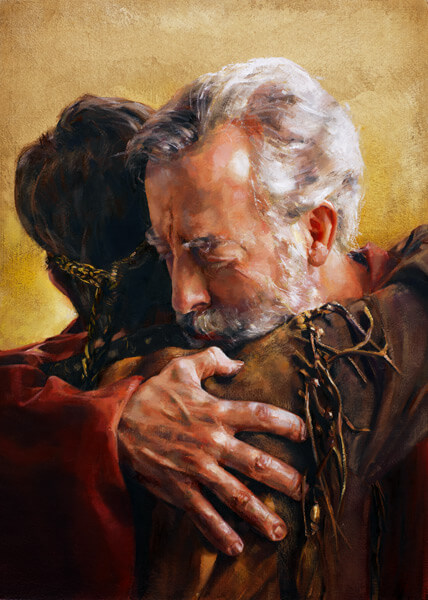 Alma the Younger was a prophet of God in the Americas during the two centuries immediately prior to the birth of Jesus Christ.  The story of his own waywardness and subsequent repentance as a youth—resulting in a greatly altered life--is a story of hope to all who earnestly seek forgiveness when it seems that forgiveness is impossible; nevertheless, this painting is concerned with the forgiveness that this repentant father extends to his wayward son, Corianton.

When Corianton was a young man, he accompanied his father, older brother, and several other carefully selected servants of the Lord, who embarked upon a mission to preach the gospel of Jesus Christ to a people who had apostatized from the Church and established their own heathen religion.  During his ministry, Corianton abandoned his commission and became entangled in harlotry.  His conduct adversely affected the overall success of the effort to reclaim those who had left the Church.

Not long after returning home, Alma, preparing to depart on yet another missionary journey, gave his farewell blessing to each of his sons.  His charge to Corianton is not only one of the finest doctrinal discourses in all of scripture, but reaches out to his erring son as an example of undying love fit for the ages.  It is the conclusion of that paternal benediction captured in this painting (see Alma 42:30-31).  Nor was the manner in which Alma dealt with his son futile, for Corianton did repent, did return to the ministry to which he had been called, and did endure faithful to the end of his days (see Alma 63:10-11).

Symbolism in This My Son

While Alma faces the viewer, Corianton is facing away.  Consequently, in the expression on Alma's face we see reflected the willingness of God to let us turn our back on the sins we have committed, on the trouble and anguish we have caused, and on the destruction the adversary has prepared for us—the destruction of our happiness, our lives, our very souls.   Alma's embrace is neither a partial nor a tentative expression of forgiveness, love, and acceptance, but is powerful in its very grasp; conveying the completeness of the Father's desire to lift us—from where we are—up and out of the darkness seeking always to drag us down.  Nor can we see Corianton's face, which means that were we to see him in another context, for example, we would not recognize him, we would not know him for the sinner he had been; we would know him only in the sublime context of God's forgiveness, a truly blessed condition in which He declares that the sins of anyone this forgiven shall be remembered no more.

Corianton's clothing is iconic of the wanderer (any prodigal); unlike the simple purity of Alma's robe, Corianton's garb also draws attention to itself and the wearer.  Just as Corianton's boastful behavior drew him "among the borders of the Lamanites, after the harlot Isabel," so his clothing faintly echoes perceptions of traditional Lamanite costume. 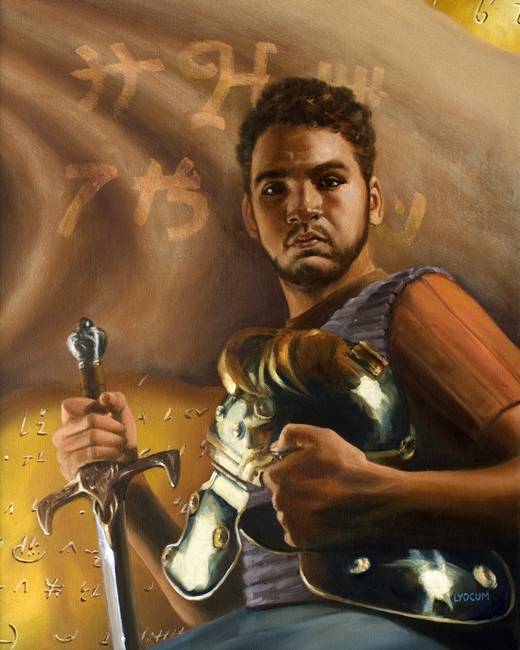 Chosen to lead the Nephite armies at age 25, Captain Moroni became an example of firmness, strength, commitment, and unconquerable faith.

The Road to Melek {Alma}

Alma the Younger was born during the second century before Christ and lived into the early part of the first century B.C.  He was the first chief judge elected by the Nephites when they altered their form of government to establish rule by judges instead of kings.  Alma the Younger was also the presiding high priest over the church among the Nephites who were followers of Jesus Christ.

As ruler of the Nephites, he fought to preserve their form of government when civil war erupted and the dissenters joined forces with the Lamanites.  Alma fought with the sword, face to face, with the leader of the rebels and with the Lamanite king. He later resigned his political office to devote full time to what amounted to an extensive itinerant ministry among his own people.

“Alma blessed the church, yea, all those who should stand fast in the faith from that time henceforth.

“And when Alma had done this he departed out of the land of Zarahemla, as if to go into the land of Melek.  And it came to pass that he was never heard of more; as to his death or burial we know not of.

“Behold, this we know, that he was a righteous man; and the saying went abroad in the church that he was taken up by the Spirit, or was buried by the hand of the Lord, even as Moses.”