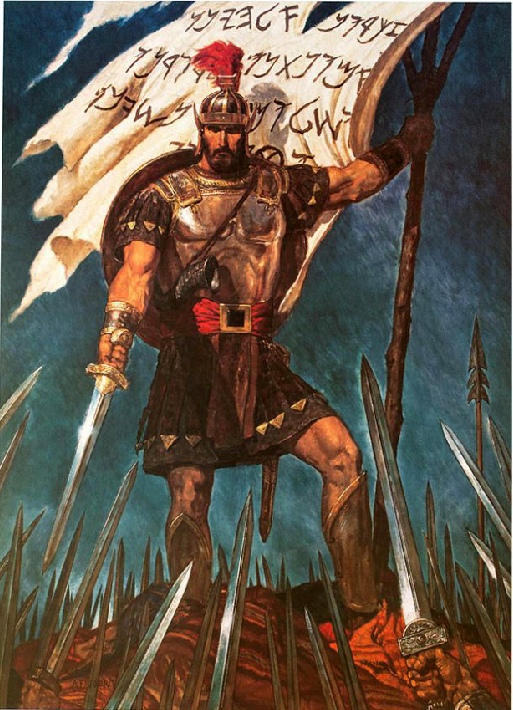 The Book of Mormon records that, though the Nephites enjoyed freedom under a constitutional republic, one man, Amalickiah, wanted to be king.  He was joined by many others who wants to exercise power over others.

The Nephite General Captain Moroni took action to educate his people as to their present privileges, and their obligation to fight for their own freedom:

“And it came to pass that he rent his coat; and he took a piece thereof, and wrote upon it – In memory of our God, our religion and freedom, and our peace, our wives, and our children – and he fastened it upon the end of a pole.”

“In the picture, CAPTAIN MORONI RAISES THE TITLE OF LIBERTY, we see yet another towering figure, that of Captain Moroni, rallying followers to fight for liberty. When this picture was being considered, it raised a problem concerning Moroni’s writing on the Title of Liberty. In the English version of the Book of Mormon, we read that Moroni wrote upon his torn coat, ‘In memory of our God, our religion, our freedom, and our peace, our wives, and our children:’ We read it in English, but Moroni didn’t write it in English. He wrote it in the language of his time, probably a version of Hebrew. There were those who insisted the lettering be in English. But in a picture of this historical event the artist wanted the writing to look as close as possible to how it appeared on the actual flag. The nearest anyone could come to the original language was to go back to Hebrew as it was at the time when Lehi left Jerusalem. So I went to my friend Rabbi Cardon and asked him to write out the words of Captain Moroni as it would have appeared at the time of Lehi and Jeremiah. At that time the squarish lettering we know today as Hebrew had not yet been invented, so they selected an earlier writing style, closer in appearance to that of the time of Moses. Of course, more than 500 years had passed between Lehi’s time and that of Moroni. A language can change a great deal in that time and we have no way of knowing what such changes might have been. In the painting, as in the book, there is a factor easily skipped over but of historical importance. We read that Moroni tore his coat and wrote upon it. This doesn’t mean that in a burst of passion he ripped the coat to shreds. Rather, his action bears out a long-established Israelite ritual.

“To rend one’s coat was the most extreme emphatic expression of one’s statement or belief, something akin to swearing with a great oath. Some even carried a small knife to make a modest incision, constituting “tearing.” We recall that at the trial of Christ, the high priest “rent his garment” as evidence that there was no further proof required to sentence Christ before the Jews. To carry this custom even further, the men rallying to Captain Moroni’s call, tore their garments and cast them about Moroni’s feet as a token or covenant of the fervency of their support. Such details are carefully shown in the painting. This last point, that of tearing the cloaks, is a strong evidence of the authenticity of the Book of Mormon. For if, as critics claim, Joseph Smith had written the book just as a novel, it is stretching the imagination to believe he could have known such an obscure bit of Israelite ritual.”

For the Blessings of Liberty 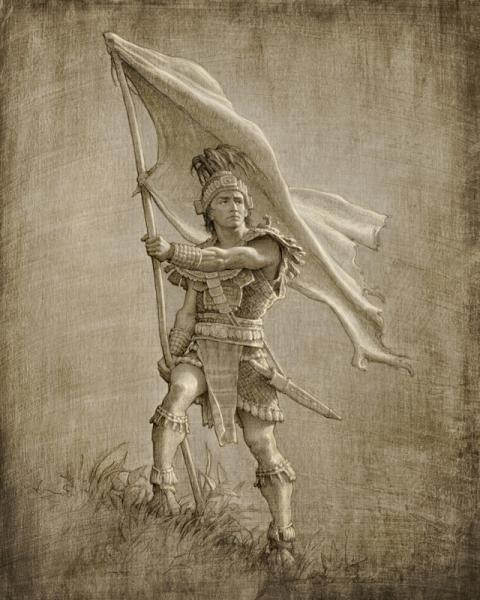 Captain Moroni used the Title of Liberty to  rally his people to fight against the invaders of their country.  The Book of Mormon says that “He went forth among the people, waving the rent part of his garment in the air, that all might see the writing which he had written upon the rent part.” 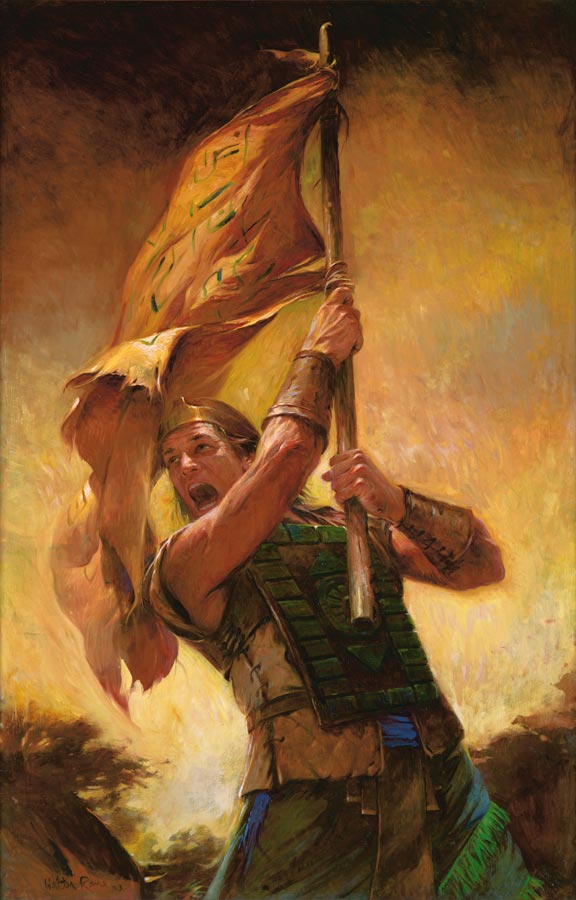 Captain Moroni, waving the title of liberty, issued a challenge and an invitation:

“Behold, whosoever will maintain this title upon the land, let them come forth in the strength of the Lord, and enter into a covenant that they will maintain their rights, and their religion, that the Lord God may bless them.” 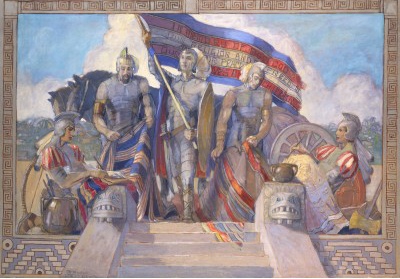 Moroni and the Title of Liberty

“Holding high his rent garment inscribed with the title of liberty, Moroni is framed on either side by four soldiers–two are kneeling, writing their oaths on their torn garments, and two stand at Moroni’s side as they rend their garments in covenant. Probably painted in 1930, the mural reflects Teichert’s beaux-arts training in its linear quality, well-defined physical features, and a symmetry intensified by the use of framing figures. Moroni stands at the top of a stairway that is flanked by two images of the feathered serpent with startling turquoise eyes. The architecture suggests Moroni is rallying his people at a temple. The symmetry and perfect balance of the mural, the clouds on the horizon, and the still horses capture a moment of noble calm before the storm of battle.”

“The Title of Liberty”

Sacred Hymns of the Book of Mormon, 15

To fight or their freedom to worship in peace, the freedom they cherished so long. 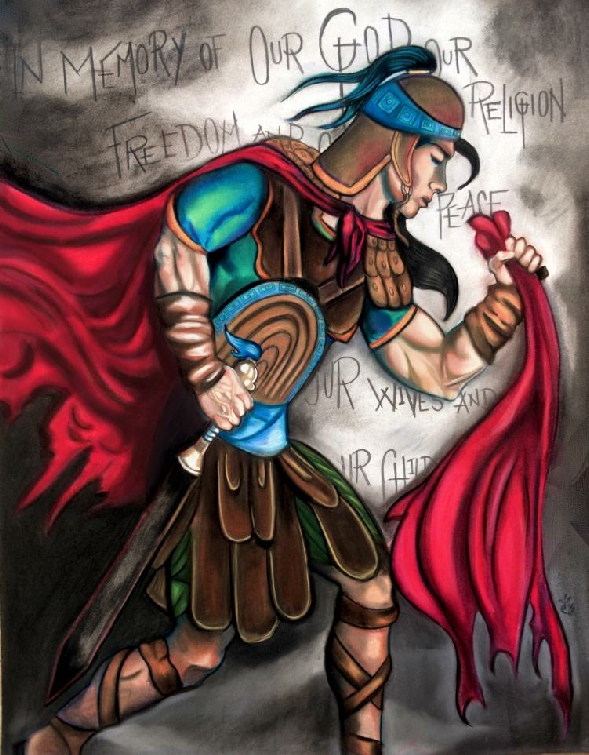 The chapters in Alma chronicling Captain Moroni's battles to keep the Nephites free are some of my favorite. I wanted to depict Moroni as the passionate young man he is described as, as a warrior, in the act of rending his coat (or cloak!) with the idea of writing and then raising the Title of Liberty in his mind. 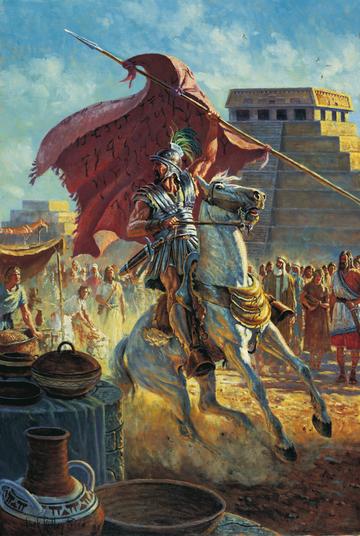 Moroni and the Title of Liberty 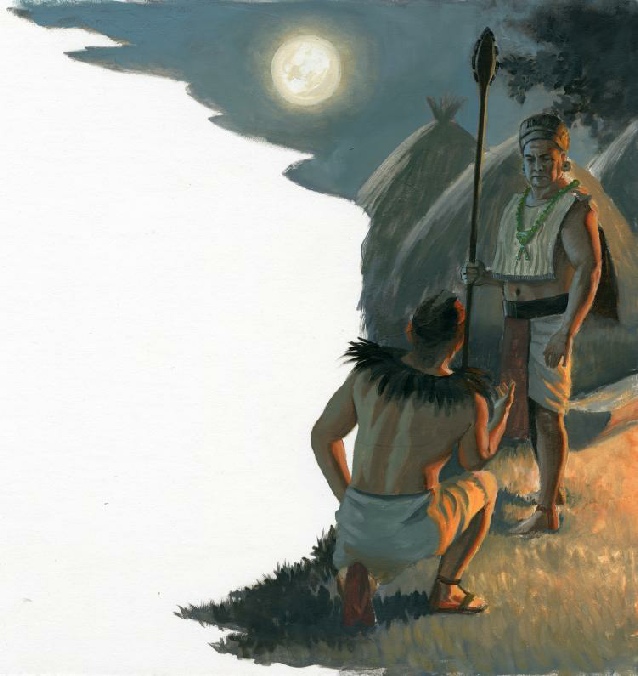 Lehonti at Camp on the Mount of Antipas 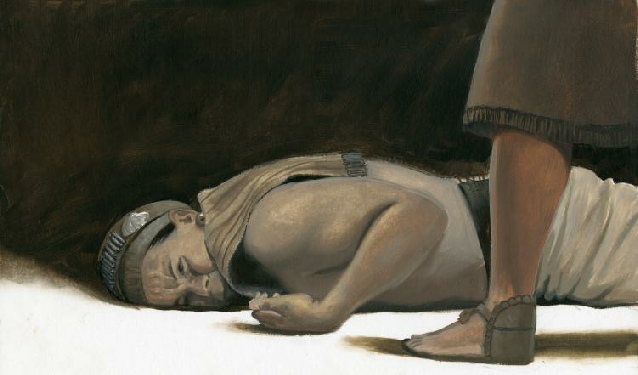 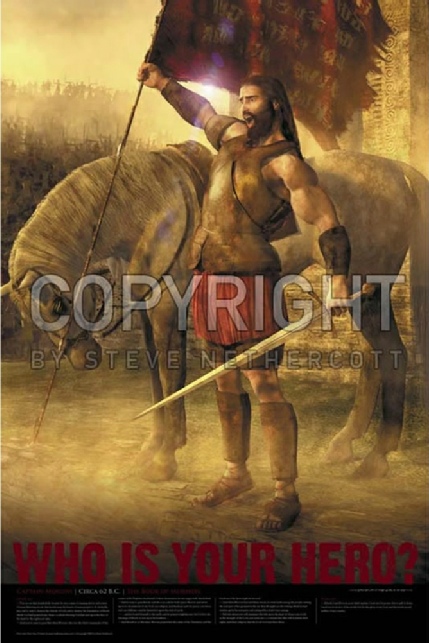 At a critical time in the history of the Nephites, the Book of Mormon records that their military commander was Captain Moroni.  He was “a strong and a mighty man.  He was a man of a perfect understanding, yea, a man that did not delight in bloodshed; a man whose soul did joy in the liberty and the freedom of his country, and his brethren from bondage and slavery.”