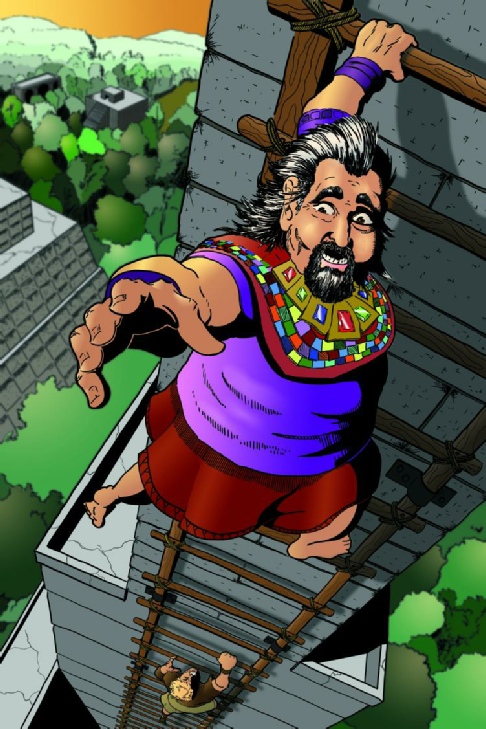 A corrupt and cowardly man, King Noah ruled the land of Lehi-Nephi and caused that his people should commit all manner of sin. After he murdered the prophet Abinadi and chased the followers of Alma from the land, King Noah’s people turned against him. Pursued by Gideon to the top of a tower, the king spotted the Lamanites invading his territory. He convinced Gideon to spare his life so that he might lead the people to safety, then persuaded some of his men to leave their families behind so their escape would not be hindered. These men would eventually burn the king to death. 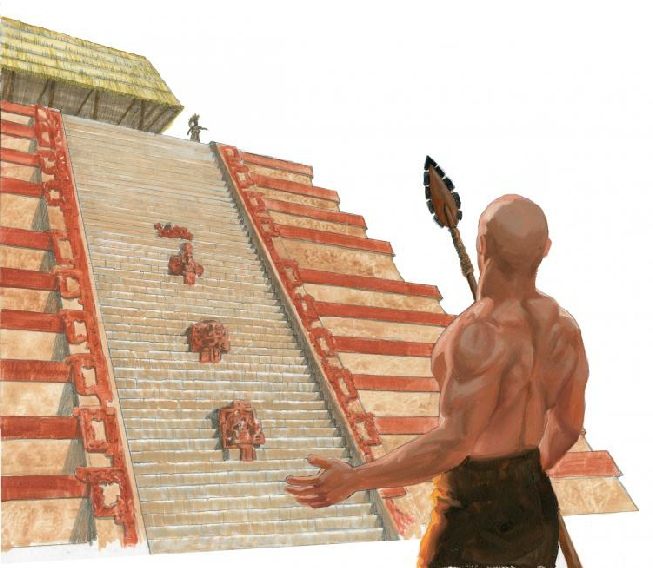 Gideon at the Tower 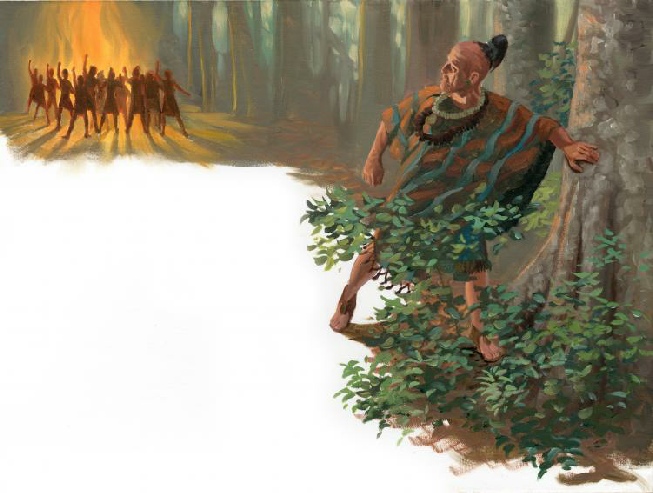 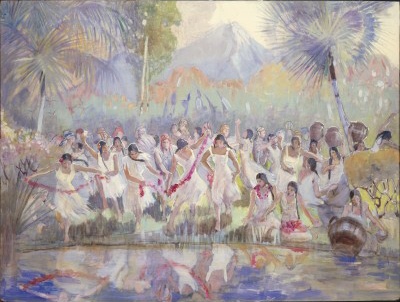 “At first glance, this scene appears to be a celebration of innocence and purity—beautiful Lamanite maidens adorned in white dresses and floral leis dance along the shimmering water’s edge. But a closer examination exposes an ominous situation. The sinister priests emerge– a faceless evil– to abduct their victims. Their operation is carried out quickly and quietly, for the maidens in front are unaware of what is happening behind them. Nor do they notice a man about to capture one of them. Another priest creeps through the bushes on the left to grab the legs of his unsuspecting victim. Tension is heightened by the backdrop of foliage and volcanic mountains, which allow no room for the maidens’ escape.” 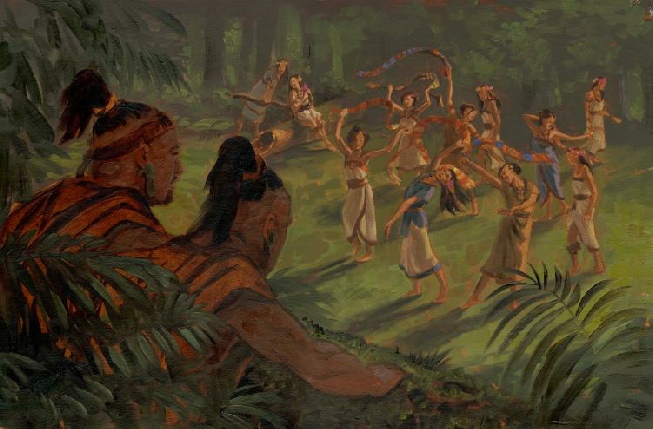 Amulon and the Daughters of the Lamanites 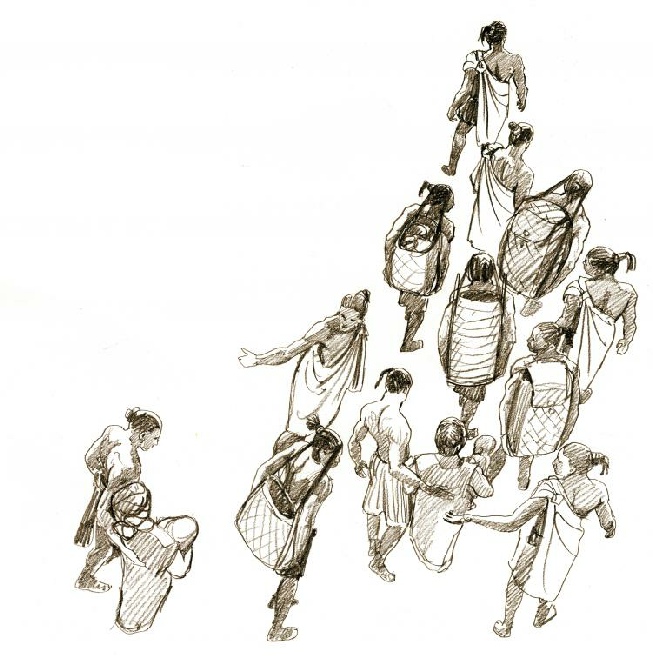 King Limhi and His People Escape 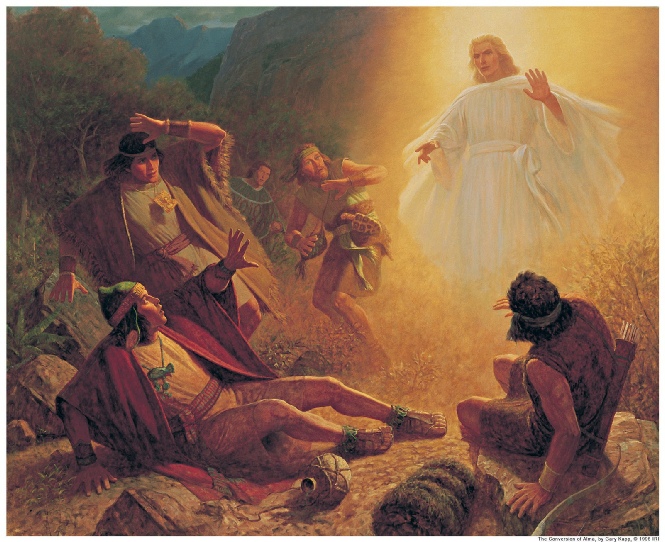 The Conversion of Alma and the Sons of Mosiah.

Much like the persecutor Saul in the New Testament, the Book of Mormon records that Alma and the sons of King Mosiah spent their days mocking and persecuting the believers in Christ.  Their parents had prayed for them, and the result of those prayers is described in the Book of Mormon:

“And as I said unto you, as they were going about rebelling against God, behold, the angel of the Lord appeared unto them; and he descended as it were in a cloud; and he spake as it were with a voice of thunder, which caused the earth to shake upon which they stood.”

The artist’s sister Janice Kapp Perry describes Brother Kapp’s experience in painting this picture, in an article she wrote for Meridian magazine.  The painting is the 5th of 9 reproductions. 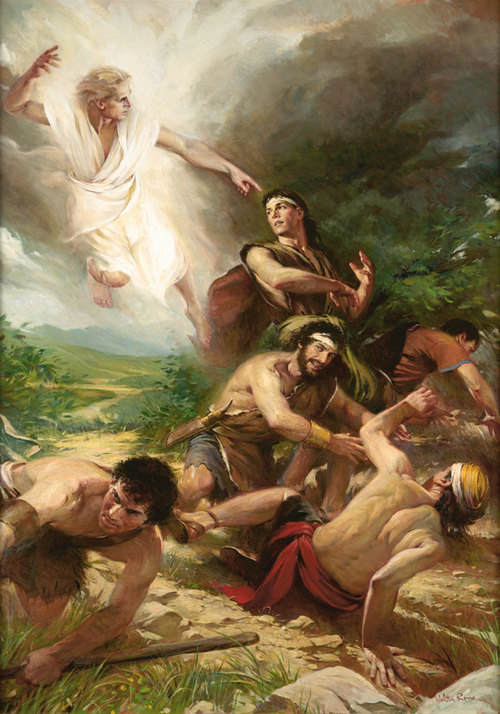 The Book of Mormon records the reaction of these young men to the angelic visitation:

“And so great was their astonishment, that they fell to the earth, and understood not the words which he spake unto them.

“Nevertheless he cried again, saying: Alma, arise and stand forth, for why persecutest thou the church of God? For the Lord hath said: This is my church, and I will establish it; and nothing shall overthrow it, save it is the transgression of my people.” 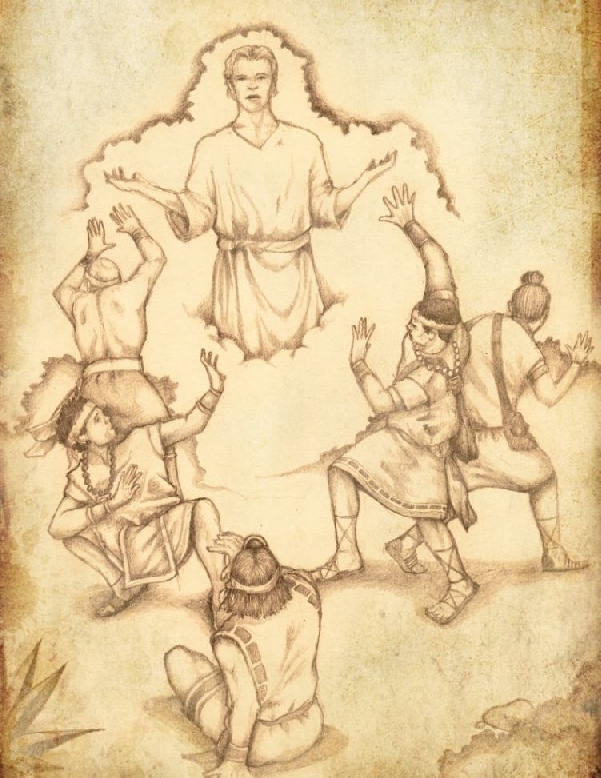 Angel Appears to Alma the Younger and the Sons of Mosiah 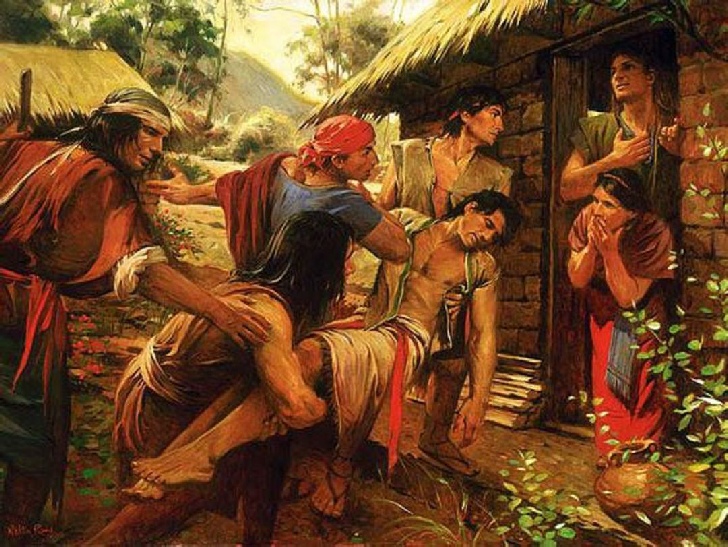 After the angelic visitation, Alma the Younger was struck dumb, and left in an unconscious state, to wrestle through his conversion from darkness to light.  He must have looked like a dead person.  The Book of Mormon records his father’s reaction to seeing his son in this state:

“And they rehearsed unto his father all that had happened unto them; and his father rejoiced, for he knew that it was the power of God.”

Sacred Hymns of the Book of Mormon, 9.

The Book of Mormon describes how Alma the Younger rejected the teachings of his father and rebelled against the Lord.  After he and his wicked companions were visited by an angel, Alma was left unconscious for some time.  During this period of apparent inactivity he repented of his sins, and when he arose, he exclaimed, “After wading through much tribulation, repenting nigh unto death, the Lord in mercy hath seen fit to snatch me out of an everlasting burning, and I am born of God.”

I am born now of God, of the Spirit I’m born,

For I cried to Lord Jesus in pain. 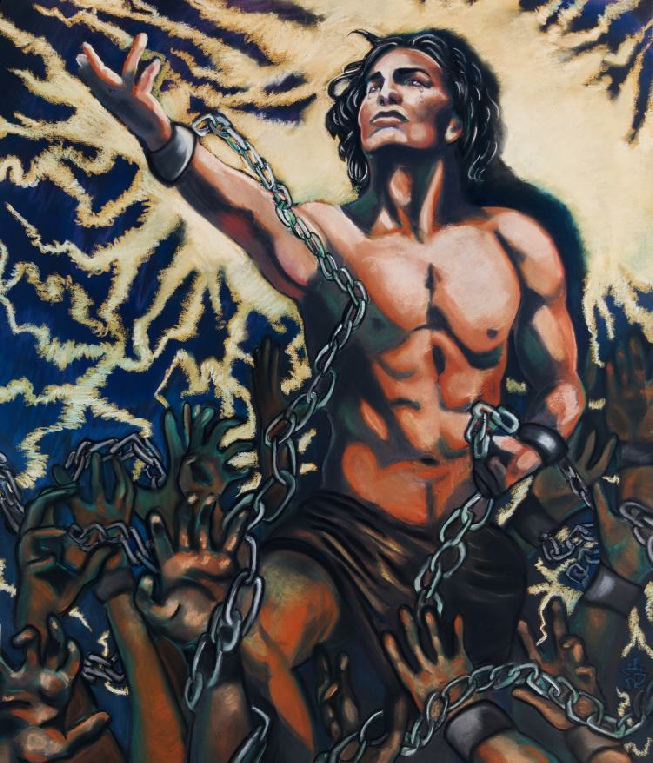 Alma’s Bondage: In the Gall of Bitterness

In creating this image, I was thinking of Mosiah 27:29: "My soul hath been redeemed from the gall of bitterness and bonds of iniquity. I was in the darkest abyss; but now I behold the marvelous light of God. My soul was racked with eternal torment; but I am snatched, and my soul is pained no more." This is his moment of epiphany. 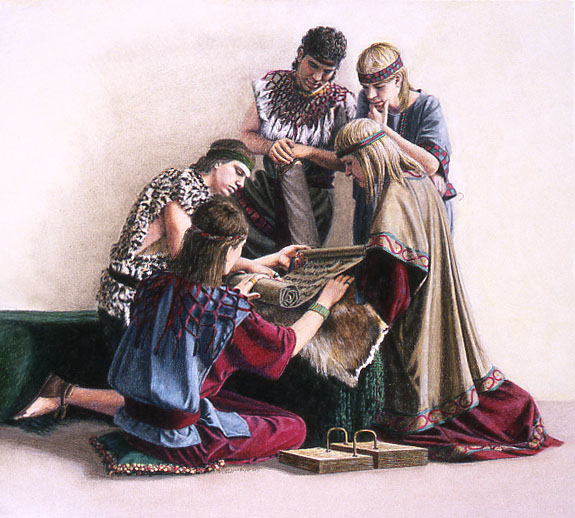 Alma and Sons of Mosiah Prepare for Mission

After Alma and the sons of Mosiah were converted to the Lord, the Book of Mormon says that “They traveled throughout all the land of Zarahemla, and among all the people . . . Zealously striving to repair all the injuries which they had done to the church, confessing all their sins, and publishing all the things which they had seen, and explaining the prophecies and the scriptures to all who desired to hear them.”

This scripture study and preaching would ultimately lead to their preparation to serve a mission among the Lamanites. 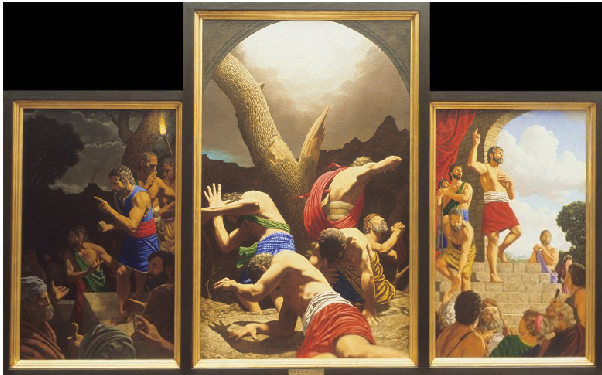 The Conversion of Alma the Younger and the Sons of Mosiah 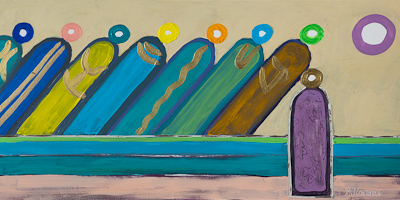 The Burden of the Righteous King

"And many more things did King Mosiah write unto them, unfolding unto them all the trials and troubles of a righteous king, yea, all the travails of soul for their people, and also all the murmurings of the people to their king;...And he told them that these things ought not to be; but that the burden should come upon all the people, that every man might bear his part...Therefore they relinquished their desires for a king, and became exceedingly anxious that every man should have an equal chance throughout all the land; yea, and every man expressed a willingness to answer for his own sins (Mosiah 29:33-34, 38)." The burdens of his people weigh this king down like a peg being driven into the ground! We know that King Mosiah did not "exact riches" of his people, thus each is depicted with a touch of gold, and the only gold on Mosiah lies on his head/crown.