A Library Tour through Mosiah 16-17

1. And now, it came to pass that after Abinadi had spoken these words he stretched forth his hand and said: The time shall come when all shall see the salvation of the Lord; when every nation, kindred, tongue, and people shall see eye to eye and shall confess before God that his judgments are just.

2. And then shall the wicked be cast out, and they shall have cause to howl, and weep, and wail, and gnash their teeth; and this because they would not hearken unto the voice of the Lord; therefore the Lord redeemeth them not.

4. Thus all mankind were lost; and behold, they would have been endlessly lost were it not that God redeemed his people from their lost and fallen state.

5. But remember that he that persists in his own carnal nature, and goes on in the ways of sin and rebellion against God, remaineth in his fallen state and the devil hath all power over him. Therefore, he is as though there was no redemption made, being an enemy to God; and also is the devil an enemy to God.

6. And now if Christ had not come into the world, speaking of things to come as though they had already come, there could have been no redemption.

7. And if Christ had not risen from the dead, or have broken the bands of death that the grave should have no victory, and that death should have no sting, there could have been no resurrection.

8. But there is a resurrection, therefore the grave hath no victory, and the sting of death is swallowed up in Christ.

13. And now, ought ye not to tremble and repent of your sins, and remember that only in and through Christ ye can be saved?

14. Therefore, if ye teach the law of Moses, also teach that it is a shadow of those things which are to come --

15. Teach them that redemption cometh through Christ the Lord, who is the very Eternal Father. Amen.

1. And now it came to pass that when Abinadi had finished these sayings, that the king commanded that the priests should take him and cause that he should be put to death.

2. But there was one among them whose name was Alma, he also being a descendant of Nephi. And he was a young man, and he believed the words which Abinadi had spoken, for he knew concerning the iniquity which Abinadi has testified against them; therefore he began to plead with the king that he would not be angry with Abinadi, but suffer that he might depart in peace.

3. But the king was more wroth, and caused that Alma should be cast out from among them, and sent his servants after him that they might slay him.

4. But he fled from before them and hid himself that they found him not. And he being concealed for many days did write all the words which Abinadi had spoken.

5. And it came to pass that the king caused that his guards should surround Abinadi and take him; and they bound him and cast him into prison.

6. And after three days, having counseled with his priests, he caused that he should again be brought before him.

7. And he said unto him: Abinadi, we have found an accusation against thee, and thou art worthy of death.

8. For thou hast said that God himself should come down among the children of men; and now, for this cause thou shalt be put to death unless thou wilt recall all the words which thou hast spoken evil concerning me and my people.

9. Now Abinadi said unto him: I say unto you, I will not recall the words which I have spoken unto you concerning this people, for they are true; and that ye may know of their surety I have suffered myself that I have fallen into your hands.

10. Yea, and I will suffer even until death, and I will not recall my words, and they shall stand as a testimony against you.

And if ye slay me ye will shed innocent blood, and this shall also stand as a testimony against you at the last day.

The Book of Mormon Miracle: 25 Reasons to Believe, by Randal A. Wright.

Chapter 26 – Both Good and Evil

As he ends his book, Dr. Wright presents powerful and compelling arguments for the truth of Joseph Smith’s testimony, which he sealed with his blood.  Dr. Wright compares him with William Tyndale, who also died a martyr, and who, like few others in history, were both good and evil spoken of, and in the end of course vindicated for his valiance in the witness and work of Christ.

“What could possibly be the motive for Joseph Smith to voluntarily go like a lamb to the slaughter?  If his motive were to get rich from the Book of Mormon, surely he would have realized after fourteen years in print that it didn’t work.  If he were seeking fame, how would going to be murdered in cold blood help that goal? . . . If he made the whole thing up for money, fame, power, or whatever other reason, why would he continue the lie when everyone he loved suffered so much because of it?  Not only did his family suffer, but also his close personal friends and thousands of believers who had joined the Church.  What could possibly be his motive for doing so?  There’s really only one answer:  because it was true.

“What Joseph accomplished in just a few short years is perhaps unequalled in history, and yet his critics act as if there were nothing extraordinary about it.  Of course, accomplishing great things does not make someone a prophet.  Fortunately, the Lord allowed tangible evidence to be left behind to prove that Joseph was a good man and a prophet of God.  The Book of Mormon is that proof.  It is true.” 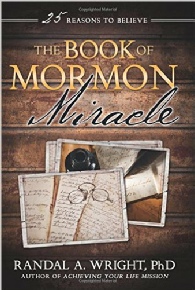 11. And now king Noah was about to release him, for he feared his word; for he feared that the judgments of God would come upon him.

12. But the priests lifted up their voices against him, and began to accuse him, saying: He has reviled the king. Therefore the king was stirred up in anger against him, and he delivered him up that he might be slain.

13. And it came to pass that they took him and bound him, and scourged his skin with faggots, yea, even unto death.

14. And now when the flames began to scorch him, he cried unto them, saying:

15. Behold, even as ye have done unto me, so shall it come to pass that thy seed shall cause that many shall suffer the pains that I do suffer, even the pains of death by fire; and this because they believe in the salvation of the Lord their God.

16. And it will come to pass that ye shall be afflicted with all manner of diseases because of your iniquities.

17. Yea, and ye shall be smitten on every hand, and shall be driven and scattered to and fro, even as a wild flock is driven by wild and ferocious beasts.

18. And in that day ye shall be hunted, and ye shall be taken by the hand of your enemies, and then ye shall suffer, as I suffer, the pains of death by fire.

19. Thus God executeth vengeance upon those that destroy his people. O God, receive my soul.

20. And now, when Abinadi had said these words, he fell, having suffered death by fire; yea, having been put to death because he would not deny the commandments of God, having sealed the truth of his words by his death.