A Library Tour through Mosiah 1-15

1. And it came to pass that after king Limhi had made an end of speaking to his people, for he spake many things unto them and only a few of them have I written in this book, he told his people all the things concerning their brethren who were in the land of Zarahemla.

3. And he also rehearsed unto them the last words which king Benjamin had taught them, and explained them to the people of king Limhi, so that they might understand all the words which he spake.

4. And it came to pass that after he had done all this, that king Limhi dismissed the multitude, and caused that they should return every one unto his own house.

5. And it came to pass that he caused that the plates which contained the record of his people from the time that they left the land of Zarahemla, should be brought before Ammon, that he might read them.

6. Now, as soon as Ammon had read the record, the king inquired of him to know if he could interpret languages, and Ammon told him that he could not.

7. And the king said unto him: Being grieved for the afflictions of my people, I caused that forty and three of my people should take a journey into the wilderness, that thereby they might find the land of Zarahemla, that we might appeal unto our brethren to deliver us out of bondage.

8. And they were lost in the wilderness for the space of many days, yet they were diligent, and found not the land of Zarahemla but returned to this land, having traveled in a land among many waters, having discovered a land which was covered with bones of men, and of beasts, and was also covered with ruins of buildings of every kind, having discovered a land which had been peopled with a people who were as numerous as the hosts of Israel.

9. And for a testimony that the things that they had said are true they have brought twenty-four plates which are filled with engravings, and they are of pure gold.

10. And behold, also, they have brought breastplates, which are large, and they are of brass and of copper, and are perfectly sound.

11. And again, they have brought swords, the hilts thereof have perished, and the blades thereof were cankered with rust; and there is no one in the land that is able to interpret the language or the engravings that are on the plates. Therefore I said unto thee: Canst thou translate?

13. Now Ammon said unto him: I can assuredly tell thee, O king, of a man that can translate the records; for he has wherewith that he can look, and translate all records that are of ancient date; and it is a gift from God. And the things are called interpreters, and no man can look in them except he be commanded, lest he should look for that he ought not and he should perish. And whosoever is commanded to look in them, the same is called seer.

14. And behold, the king of the people who are in the land of Zarahemla is the man that is commanded to do these things, and who has this high gift from God.

15. And the king said that a seer is greater than a prophet.

16. And Ammon said that a seer is a revelator and a prophet also; and a gift which is greater can no man have, except he should possess the power of God, which no man can; yet a man may have great power given him from God.

18. Thus God has provided a means that man, through faith, might work mighty miracles; therefore he becometh a great benefit to his fellow beings.

19. And now, when Ammon had made an end of speaking these words the king rejoiced exceedingly, and gave thanks to God, saying: Doubtless a great mystery is contained within these plates, and these interpreters were doubtless prepared for the purpose of unfolding all such mysteries to the children of men.

20. O how marvelous are the works of the Lord, and how long doth he suffer with his people; yea, and how blind and impenetrable are the understandings of the children of men; for they will not seek wisdom, neither do they desire that she should rule over them!

21. Yea, they are as a wild flock which fleeth from the shepherd, and scattereth, and are driven, and are devoured by the beasts of the forest.

“The similes in the Book of Mormon demonstrate remarkable variation, from grotesque to beautiful, from condemnatory and damning to consoling and reassuring.

“. . . The existence of so many varied and beautiful similes is an indicator of the inspiration of the prophetic authors of the Book of Mormon, and of the literary significance and sophistication of the text.”

The author then lists many of the similes found in the Book of Mormon.  He further briefly discusses simile curses and simile blessings. 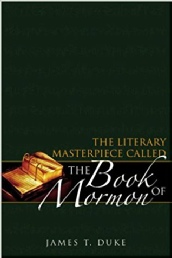 1. I, Zeniff, having been taught in all the language of the Nephites, and having had a knowledge of the land of Nephi, or of the land of our fathers' first inheritance, and having been sent as a spy among the Lamanites that I might spy out their forces, that our army might come upon them and destroy them -- but when I saw that which was good among them I was desirous that they should not be destroyed.

2. Therefore, I contended with my brethren in the wilderness for I would that our ruler should make a treaty with them; but he being an austere and a bloodthirsty man commanded that I should be slain; but I was rescued by the shedding of much blood; for father fought against father, and brother against brother, until the greater number of our army was destroyed in the wilderness; and we returned, those of us that were spared, to the land of Zarahemla, to relate that tale to their wives and their children.

3. And yet, I being over-zealous to inherit the land of our fathers, collected as many as were desirous to go up to possess the land, and started again on our journey into the wilderness to go up to the land; but we were smitten with famine and sore afflictions; for we were slow to remember the Lord our God.

4. Nevertheless, after many days' wandering in the wilderness we pitched our tents in the place where our brethren were slain, which was near to the land of our fathers.

6. And I went in unto the king, and he covenanted with me that I might possess the land of Lehi-Nephi, and the land of Shilom.

7. And he also commanded that his people should depart out of the land, and I and my people went into the land that we might possess it.

10. Now it was the cunning and the craftiness of king Laman, to bring my people into bondage, that he yielded up the land that we might possess it.

11. Therefore it came to pass, that after we had dwelt in the land for the space of twelve years that king Laman began to grow uneasy, lest by any means my people should wax strong in the land, and that they could not overpower them and bring them into bondage.

13. Therefore it came to pass that king Laman began to stir up his people that they should contend with my people; therefore there began to be wars and contentions in the land.

15. Yea, and it came to pass that they fled, all that were not overtaken, even into the city of Nephi, and did call upon me for protection.

16. And it came to pass that I did arm them with bows, and with arrows, with swords, and with cimeters, and with clubs, and with slings, and with all manner of weapons which we could invent, and I and my people did go forth against the Lamanites to battle.

17. Yea, in the strength of the Lord did we go forth to battle against the Lamanites; for I and my people did cry mightily to the Lord that he would deliver us out of the hands of our enemies, for we were awakened to a remembrance of the deliverance of our fathers.

19. And I, myself, with mine own hands, did help to bury their dead. And behold, to our great sorrow and lamentation, two hundred and seventy-nine of our brethren were slain.