A Library Tour through Mosiah 6 & 7

1. And now, king Benjamin thought it was expedient, after having finished speaking to the people, that he should take the names of all those who had entered into a covenant with God to keep his commandments.

2. And it came to pass that there was not one soul, except it were little children, but who had entered into the covenant and had taken upon them the name of Christ.

“Despite Benjamin’s long and successful reign as a highly revered king within a generation after his death the Nephites . . . abandoned the idea of kingship altogether and moved on to a more democratic form of government . . .

“Such a change in the fundamental structure of a society is usually accompanied by great upheavals and radical social restructuring.  Dislodging a royal family, divesting aristocratic property owners, and unseating entrenched officials usually involves demagoguery and disruption, if not violence and revolution.  But the transition from kingship to democracy in Zarahemla was accomplished relatively easily. . .

“The question thus becomes: How is one to explain this remarkably smooth transition?”

Welch gives a penetrating answer, expounding on nineteen different aspects of King Benjamin’s speech, which “paved the way . . . for the obsolescence of the monarchy.”

3. And again, it came to pass that when king Benjamin had made an end of all these things, and had consecrated his son Mosiah to be a ruler and a king over his people, and had given him all the charges concerning the kingdom, and also had appointed priests to teach the people, that thereby they might hear and know the commandments of God, and to stir them up in remembrance of the oath which they had made, he dismissed the multitude, and they returned, every one, according to their families, to their own houses.

4. And Mosiah began to reign in his father's stead. And he began to reign in the thirtieth year of his age, making in the whole, about four hundred and seventy-six years from the time that Lehi left Jerusalem.

5. And king Benjamin lived three years and he died.

6. And it came to pass that king Mosiah did walk in the ways of the Lord, and did observe his judgments and his statutes, and did keep his commandments in all things whatsoever he commanded him.

7. And king Mosiah did cause his people that they should till the earth. And he also, himself, did till the earth, that thereby he might not become burdensome to his people, that he might do according to that which his father had done in all things. And there was no contention among all his people for the space of three years.

1. And now, it came to pass that after king Mosiah had had continual peace for the space of three years, he was desirous to know concerning the people who went up to dwell in the land of Lehi-Nephi, or in the city of Lehi-Nephi; for his people had heard nothing from them from the time they left the land of Zarahemla; therefore, they wearied him with their teasings.

2. And it came to pass that king Mosiah granted that sixteen of their strong men might go up to the land of Lehi-Nephi to inquire concerning their brethren.

3. And it came to pass that on the morrow they started to go up, having with them one Ammon, he being a strong and mighty man, and a descendant of Zarahemla; and he was also their leader.

5. And when they had wandered forty days they came to a hill, which is north of the land of Shilom, and there they pitched their tents.

6. And Ammon took three of his brethren, and their names were Amaleki, Helem, and Hem, and they went down into the land of Nephi.

9. And he said unto them: Behold, I am Limhi, the son of Noah, who was the son of Zeniff, who came up out of the land of Zarahemla to inherit this land, which was the land of their fathers, who was made a king by the voice of the people.

10. And now, I desire to know the cause whereby ye were so bold as to come near the walls of the city, when I, myself, was with my guards without the gate?

11. And now, for this cause have I suffered that ye should be preserved, that I might inquire of you, or else I should have caused that my guards should have put you to death. Ye are permitted to speak.

12. And now, when Ammon saw that he was permitted to speak, he went forth and bowed himself before the king; and rising again he said: O king, I am very thankful before God this day that I am yet alive, and am permitted to speak; and I will endeavor to speak with boldness;

13. For I am assured that if ye had known me ye would not have suffered that I should have worn these bands. For I am Ammon, and am a descendant of Zarahemla, and have come up out of the land of Zarahemla to inquire concerning our brethren, whom Zeniff brought up out of that land.

14. And now, it came to pass that after Limhi had heard the words of Ammon, he was exceedingly glad, and said: Now, I know of a surety that my brethren who were in the land of Zarahemla are yet alive. And now, I will rejoice; and on the morrow I will cause that my people shall rejoice also.

15. For behold, we are in bondage to the Lamanites, and are taxed with a tax which is grievous to be borne. And now, behold, our brethren will deliver us out of our bondage, or out of the hands of the Lamanites, and we will be their slaves; for it is better that we be slaves to the Nephites than to pay tribute to the king of the Lamanites.

16. And now, king Limhi commanded his guards that they should no more bind Ammon nor his brethren, but caused that they should go to the hill which was north of Shilom, and bring their brethren into the city, that thereby they might eat, and drink, and rest themselves from the labors of their journey; for they had suffered many things; they had suffered hunger, thirst, and fatigue.

17. And now, it came to pass on the morrow that king Limhi sent a proclamation among all his people, that thereby they might gather themselves together to the temple to hear the words which he should speak unto them.

18. And it came to pass that when they had gathered themselves together that he spake unto them in this wise, saying: O ye, my people, lift up your heads and be comforted; for behold, the time is at hand, or is not far distant, when we shall no longer be in subjection to our enemies, notwithstanding our many strugglings, which have been in vain; yet I trust there remaineth an effectual struggle to be made.

19. Therefore, lift up your heads, and rejoice, and put your trust in God, in that God who was the God of Abraham, and Isaac, and Jacob; and also, that God who brought the children of Israel out of the land of Egypt, and caused that they should walk through the Red Sea on dry ground, and fed them with manna that they might not perish in the wilderness; and many more things did he do for them.

20. And again, that same God has brought our fathers out of the land of Jerusalem, and has kept and preserved his people even until now; and behold, it is because of our iniquities and abominations that he has brought us into bondage.

21. And ye all are witnesses this day, that Zeniff, who was made king over this people, he being over-zealous to inherit the land of his fathers, therefore being deceived by the cunning and craftiness of king Laman, who having entered into a treaty with king Zeniff, and having yielded up into his hands the possessions of a part of the land, or even the city of Lehi-Nephi, and the city of Shilom; and the land round about --

23. And now, is not this grievous to be borne? And is not this, our affliction, great? Now behold, how great reason we have to mourn.

24. Yea, I say unto you, great are the reasons which we have to mourn; for behold how many of our brethren have been slain, and their blood has been spilt in vain, and all because of iniquity.

25. For if this people had not fallen into transgression the Lord would not have suffered that this great evil should come upon them. But behold, they would not hearken unto his words; but there arose contentions among them, even so much that they did shed blood among themselves.

26. And a prophet of the Lord have they slain; yea, a chosen man of God, who told them of their wickedness and abominations, and prophesied of many things which are to come, yea, even the coming of Christ.

27. And because he said unto them that Christ was the God, the Father of all things, and said that he should take upon him the image of man, and it should be the image after which man was created in the beginning; or in other words, he said that man was created after the image of God, and that God should come down among the children of men, and take upon him flesh and blood, and go forth upon the face of the earth --

28. And now, because he said this, they did put him to death; and many more things did they do which brought down the wrath of God upon them. Therefore, who wondereth that they are in bondage, and that they are smitten with sore afflictions?

29. For behold, the Lord hath said: I will not succor my people in the day of their transgression; but I will hedge up their ways that they prosper not; and their doings shall be as a stumbling block before them.

30. And again, he saith: If my people shall sow filthiness they shall reap the chaff thereof in the whirlwind; and the effect thereof is poison.

31. And again he saith: If my people shall sow filthiness they shall reap the east wind, which bringeth immediate destruction.

32. And now, behold, the promise of the Lord is fulfilled, and ye are smitten and afflicted.

33. But if ye will turn to the Lord with full purpose of heart, and put your trust in him, and serve him with all diligence of mind, if ye do this, he will, according to his own will and pleasure, deliver you out of bondage. 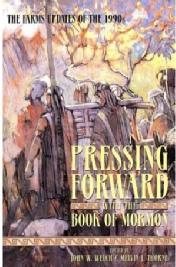