A Library Tour through the

1.  And now I, Mormon, being about to deliver up the record which I have been making into the hands of my son Moroni, behold I have witnessed almost all the destruction of my people, the Nephites.

2.  And it is many hundred years after the coming of Christ that I deliver these records into the hands of my son; and it supposeth me that he will witness the entire destruction of my people. But may God grant that he may survive them, that he may write somewhat concerning them, and somewhat concerning Christ, that perhaps some day it may profit them.

4.  And the things which are upon these plates pleasing me, because of the prophecies of the coming of Christ; and my fathers knowing that many of them have been fulfilled; yea, and I also know that as many things as have been prophesied concerning us down to this day have been fulfilled, and as many as go beyond this day must surely come to pass --

5.  Wherefore, I chose these things, to finish my record upon them, which remainder of my record I shall take from the plates of Nephi; and I cannot write the hundredth part of the things of my people.

6.  But behold, I shall take these plates, which contain these prophesyings and revelations, and put them with the remainder of my record, for they are choice unto me; and I know they will be choice unto my brethren.

7.  And I do this for a wise purpose; for thus it whispereth me, according to the workings of the Spirit of the Lord which is in me. And now, I do not know all things; but the Lord knoweth all things which are to come; wherefore, he worketh in me to do according to his will.

This book is our introduction to the compiler of the Book of Mormon, a spiritual leader, a great warrior, and a literary genius.  He uses a chiasm (verses 3-7) to conclude his explanation of the Small Plates, before he introduces his own abridgement of the rest of the Nephite history.  This chiasm contains other inter-woven parallelisms.  We can appreciate and understand every point he makes in this section, but when we see the lay-out of the chiasm, we can understand what he considers to be the most important point of what he is saying. 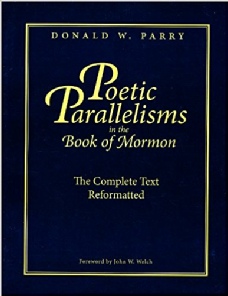 9.  And now I, Mormon, proceed to finish out my record, which I take from the plates of Nephi; and I make it according to the knowledge and the understanding which God has given me.

In this thorough yet very readable book, Dr. Duke discusses an astounding ninety different literary forms, most of them of Hebrew origin.

“The literary style of the scriptures is obviously very important to God and to the prophets whom he sends to carry his word to his people.  It is obvious to me that God speaks to us, individually and collectively, in poetic and literary language.  I make no claim that literary style is as important as the spiritual content of the prophetic messages.  In a sense, literary style is fluff, or the frosting on the cake.  Yet the scriptures are given for the purpose of helping god’s children understand his message at a cognitive level, as well as to feel spiritual and emotional feelings that will motivate them to take actions that will lead them to salvation and exaltation.  Literary style helps people to pay attention to the message, remember it, and feel a sense of spirituality as well as beauty.  So literary style is really not fluff after all, but an essential ingredient in communicating God’s message to his children.  To emphasize this point again, God speaks to us in poetic and literary language.”

Before I read this book, I considered the Book of Mormon style to be somewhat rambling and repetitive, a good candidate for a more concise abridged version.  Now I am astounded at the density I see in the book; layer upon layer of deliberate, careful, and varied repetition give power and emphasis to the div 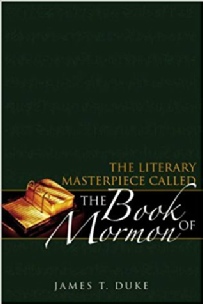 10.  Wherefore, it came to pass that after Amaleki had delivered up these plates into the hands of king Benjamin, he took them and put them with the other plates, which contained records which had been handed down by the kings, from generation to generation until the days of king Benjamin.

11.  And they were handed down from king Benjamin, from generation to generation until they have fallen into my hands. And I, Mormon, pray to God that they may be preserved from this time henceforth. And I know that they will be preserved; for there are great things written upon them, out of which my people and their brethren shall be judged at the great and last day, according to the word of God which is written.

12.  And now, concerning this king Benjamin -- he had somewhat of contentions among his own people.

13.  And it came to pass also that the armies of the Lamanites came down out of the land of Nephi, to battle against his people.

But behold, king Benjamin gathered together his armies, and he did stand against them; and he did fight with the strength of his own arm, with the sword of Laban.

15.  And it came to pass that after there had been false Christs, and their mouths had been shut, and they punished according to their crimes;

16.  And after there had been false prophets, and false preachers and teachers among the people, and all these having been punished according to their crimes; and after there having been much contention and many dissensions away unto the Lamanites, behold, it came to pass that king Benjamin, with the assistance of the holy prophets who were among his people --

17.  For behold, king Benjamin was a holy man, and he did reign over his people in righteousness; and there were many holy men in the land, and they did speak the word of God with power and with authority; and they did use much sharpness because of the stiffneckedness of the people --

18.  Wherefore, with the help of these, king Benjamin, by laboring with all the might of his body and the faculty of his whole soul, and also the prophets, did once more establish peace in the land.