An Artistic Tour of 1 Nephi 4

“And I was led by the Spirit, not knowing beforehand the things which I should do.”  Thus Nephi describes his final successful acquisition of the plates of brass, as directed by the Lord.

In the Book of Mormon, young Nephi and his brothers have the commission to obtain the sacred record, so that their descendants will know the commandments of the Lord.  They’ve unsuccessfully tried several ways to obtain them, and Nephi knows that he can only rely upon the Lord for help, because he is on the Lord’s errand. 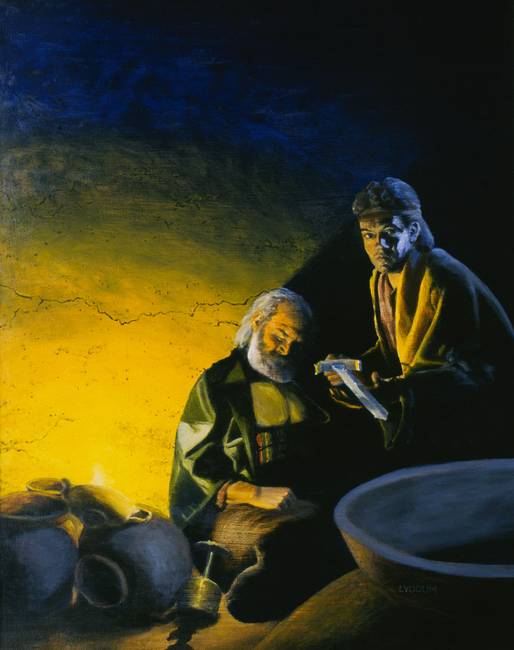 “Nevertheless I went forth, and as I came near unto the house of Laban I beheld a man, and he had fallen to the earth before me, for he was drunken with wine.  And when I came to him I found that it was Laban.  And I beheld his sword, and I drew it forth from the sheath thereof.”

“Nephi ponders what to do with the man who has done so much harm to his family, now found drunk and helpless in an alley at night.” 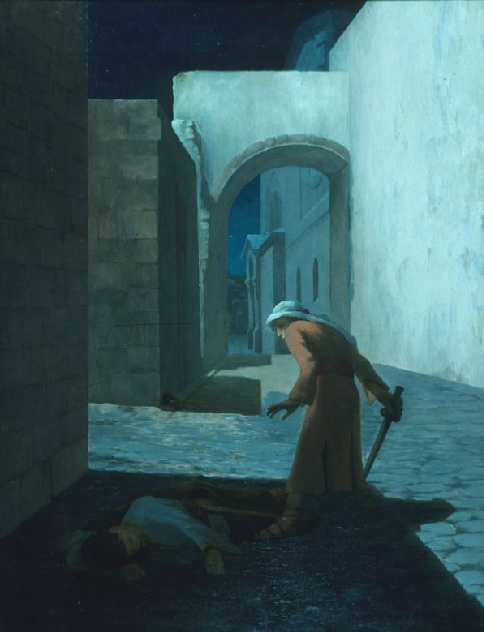 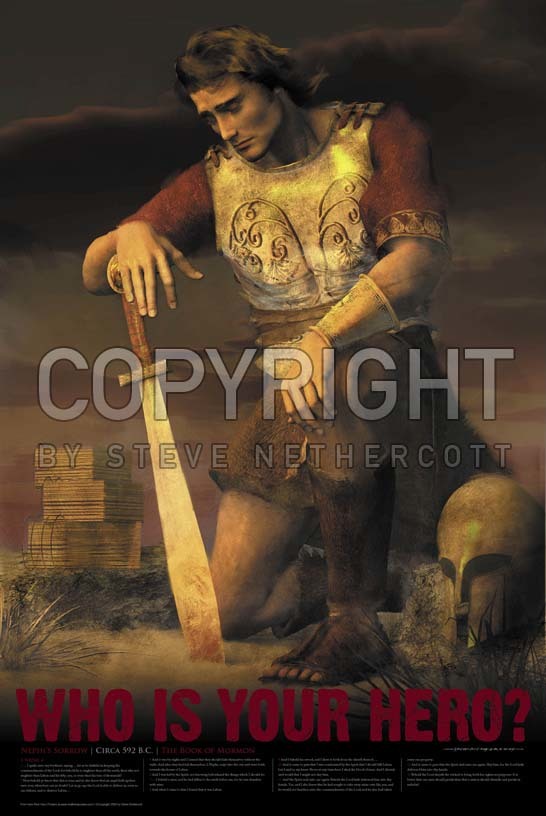 Nephi faced a dilemma – to stay in his comfort zone, or to do a difficult thing that the Lord was commanding him.  The Book of Mormon says,

“And it came to pass that I was constrained by the Spirit that I should kill Laban; but I said in my heart: Never at any time have I shed the blood of man. And I shrunk and would that I might not slay him.

“And the Spirit said unto me again: Behold the Lord hath delivered him into thy hands.

“Yea, and I also knew that he had sought to take away mine own life; yea, and he would not hearken unto the commandments of the Lord; and he also had taken away our property.

“And it came to pass that the Spirit said unto me again: Slay him, for the Lord hath delivered him into thy hands.  Behold the Lord slayeth the wicked to bring forth his righteous purposes. It is better that one man should perish than that a nation should dwindle and perish in unbelief.” 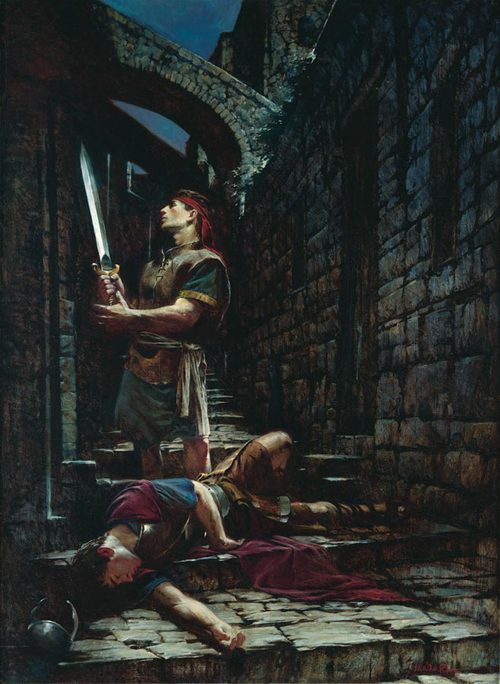 I Did Obey the Voice of the Spirit

Nephi made his decision:

“Therefore I did obey the voice of the Spirit, and took Laban by the hair of the head, and I smote off his head with his own sword.” 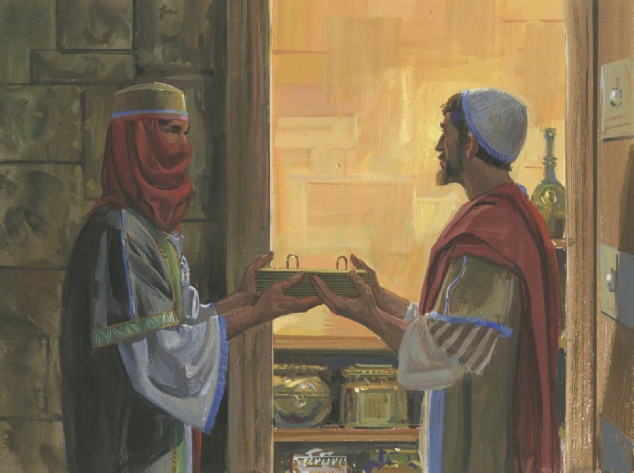 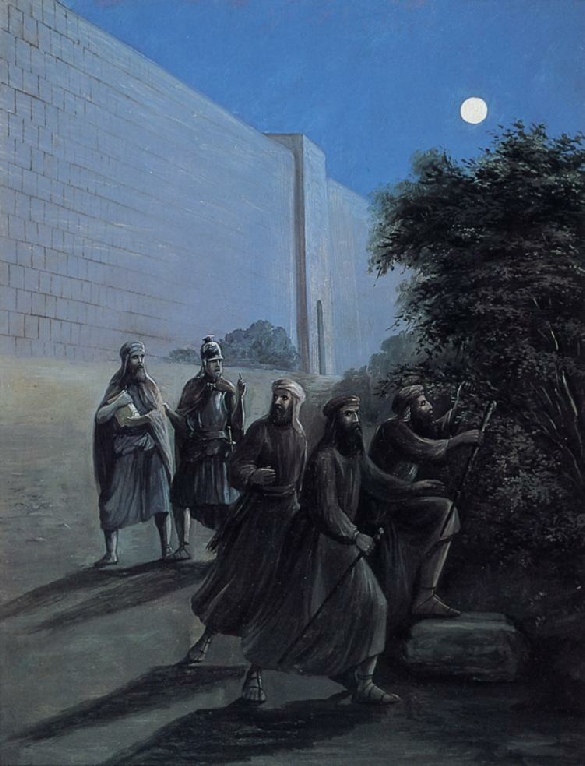 Nephi and Zoram with the Brass Plates

Lehi sent his sons back to Jerusalem to obtain genealogical and religious records. Nephi acquired the records with considerable difficulty, through divine aid, and persuaded Zoram, a servant who delivered the precious items to Nephi, to join his family in the wilderness. In this night scene Nephi and Zoram meet Nephi's brothers outside the walls of Jerusalem. The brothers, mistaking their identity, flee in panic. There is charming melodrama in the expressive nature of this painting.

“At first Nephi could not get the brass plates from Laban, but Nephi chose to be obedient, and the Lord prepared a way. Nephi obtained the plates and gave them to his father, Lehi.” 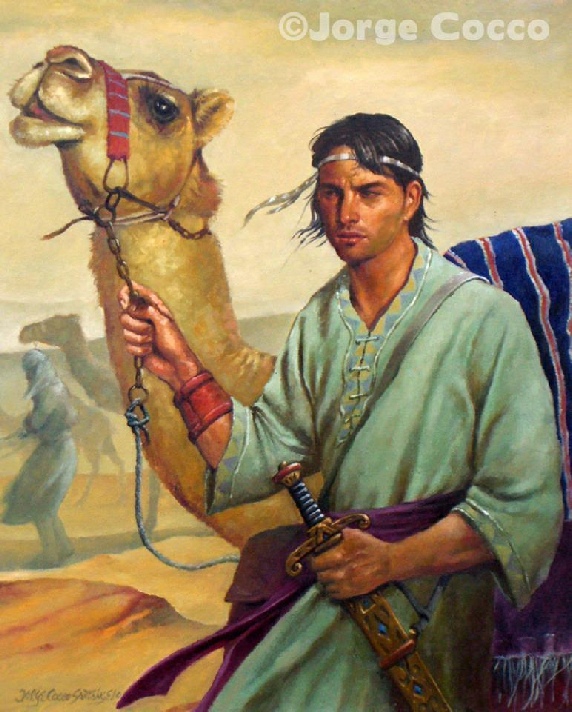 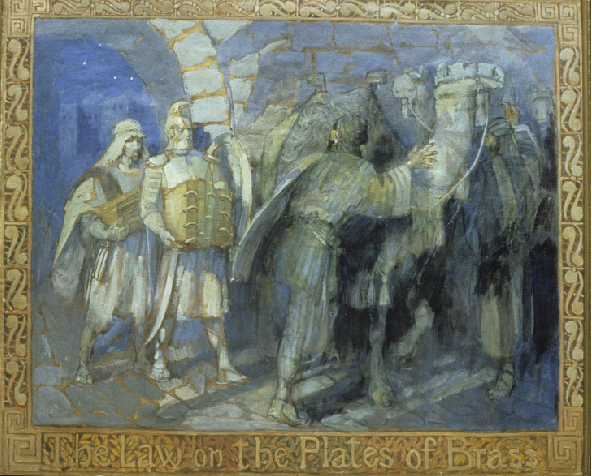 The Law on the Plates of Brass