An Artistic Tour of 3 Nephi 11 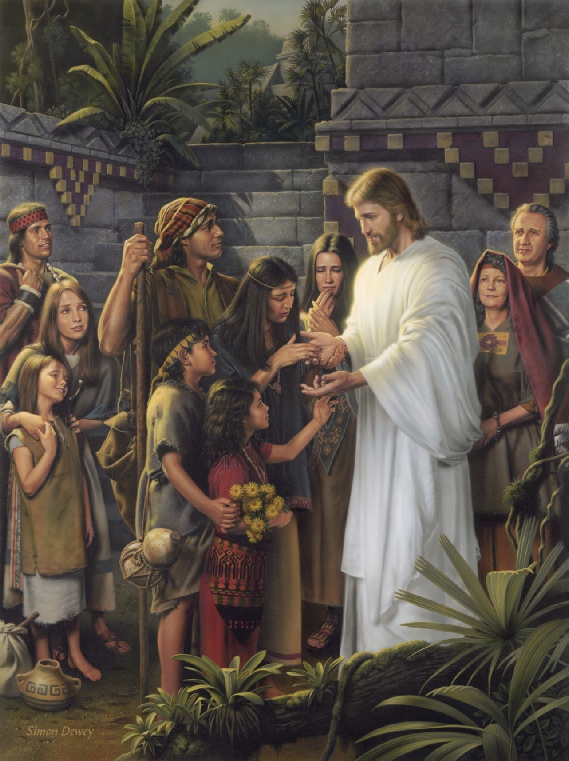 Christ in the Land Bountiful

Things Old Are Done Away - Marilyn Arnold and Maurine Ozment

Sacred Hymns of the Book of Mormon, 23

The Book of Mormon recounts how Jesus appeared to the people of ancient America, and taught them similar to His teachings in the New Testament.

This song celebrates His voice to these people, and the hope that He gives to all.

This Is My Beloved Son - Marvin K. Gardner and Vanja Y. Watkins

Heavenly Father has rarely spoken directly to people.  He generally sends angels, commissions His Son the Lord, or speaks through the Holy Ghost.  The New Testament tells us that God Himself, with His own voice, commended Jesus as His “beloved Son,” when Jesus submitted to baptism.

The highest point of the Book of Mormon is when Jesus, after His crucifixion and resurrection in the Old World, visited His people in the New World, His “other sheep.”  God the Father introduced Him to these people at that time.

This song recalls these two times the Father spoke and introduced His beloved Son, and additionally when God spoke to young Joseph Smith, who was called to restore the fulness of the Lord’s gospel. 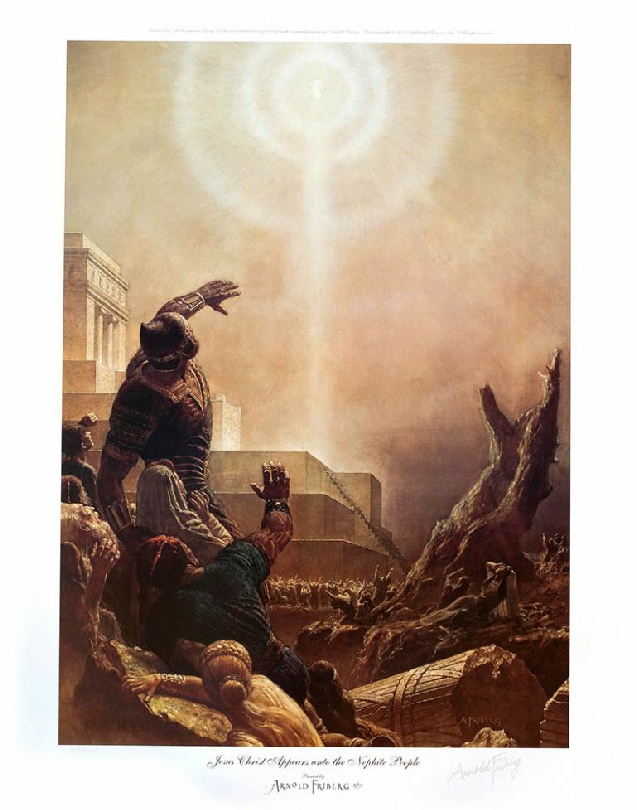 Jesus Appears unto the Nephite People

The climax of the Book of Mormon is the wonderful visit of Jesus Christ to the inhabitants of ancient America.  This supernal visit, but dimly recalled in the Great White God legends

of many of these peoples, is recorded with crystal clarity in the Book of Mormon.

“And it came to pass, as they understood, they cast their eyes up again towards heaven; and behold, they saw a Man descending out of heaven; and he was clothed in a white robe; and he came down and stood in the midst of them; and they eyes of the whole multitude were turned upon him, and they durst not open their mouths, even one to another, and wist not what it meant, for they thought it was an angel that had appeared unto them.”

The pinnacle of the Book of Mormon is portrayed in the next work,  JESUS CHRIST APPEARS UNTO THE NEPHITE PEOPLE. Here we witness a glorious scene fulfilling the words of prophets and holy men from all the ages past; the sublime climactic event of the Book of Mormon. It is after the three days of darkness and the terrible destruction upon the whole face of the land that now the darkness lifts, a divine voice is heard, as the figure of the glorified resurrected Lord descends from heaven to an awestruck multitude below. It is truly the time foretold.

Here I sought to express in paint the transcendent spiritual glory of the wondrous thing that happened there that day. I painted the divine figure so high in the air to fulfill the written description, and yet small enough to avoid any criticism of trying to paint a likeness of the risen Lord.

Classic Scenes from the Book of Mormon 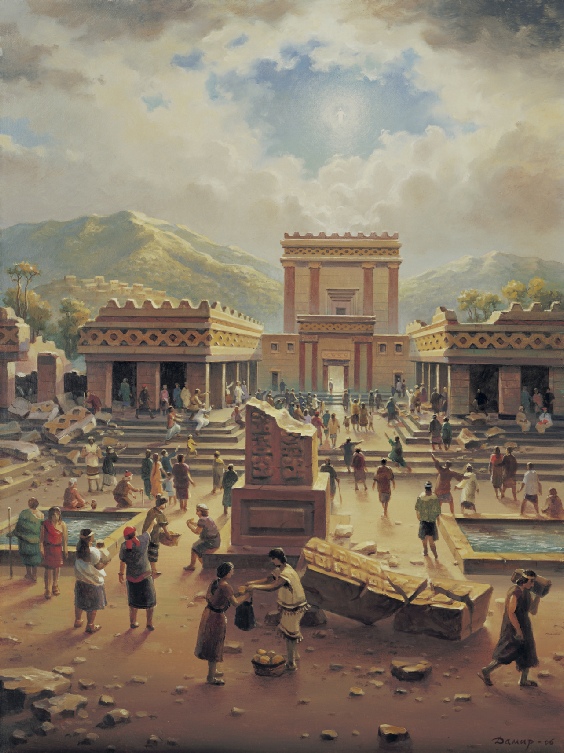 Christ Appearing to the Nephites 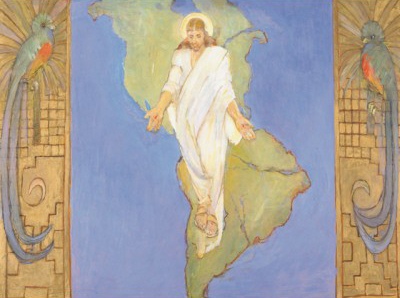 “In this piece beloved by Latter-Day Saints, Christ smiles down as Lord of the Western hemisphere and welcomes its inhabitants with outstretched arms. He invites us to inspect his wounds–tokens of his Atonement–and witness that he is risen.” 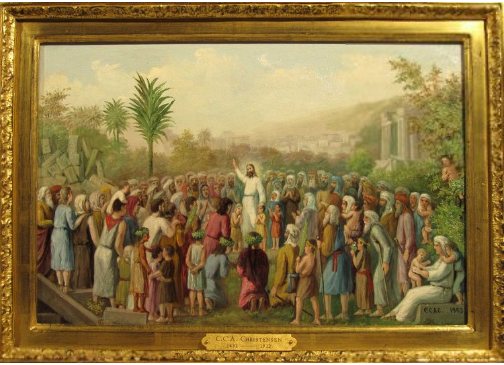 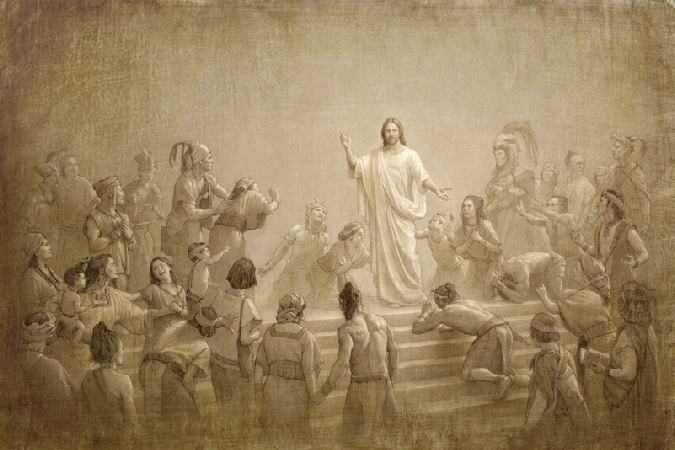 The Book of Mormon records:  “He stretched forth his hand and spake unto the people, saying, “Behold, I am Jesus Christ, whom the prophets testified shall come into the world.” 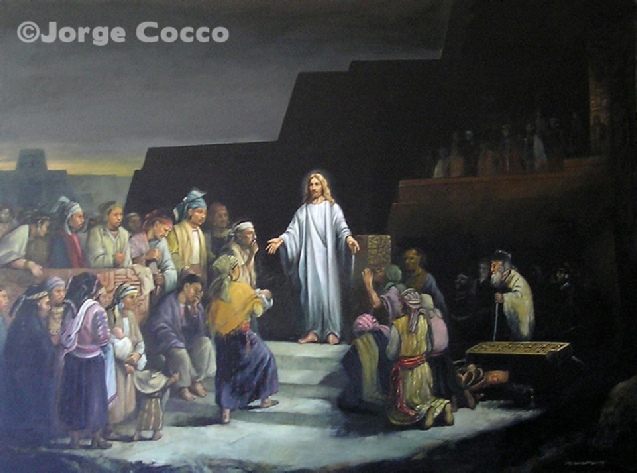 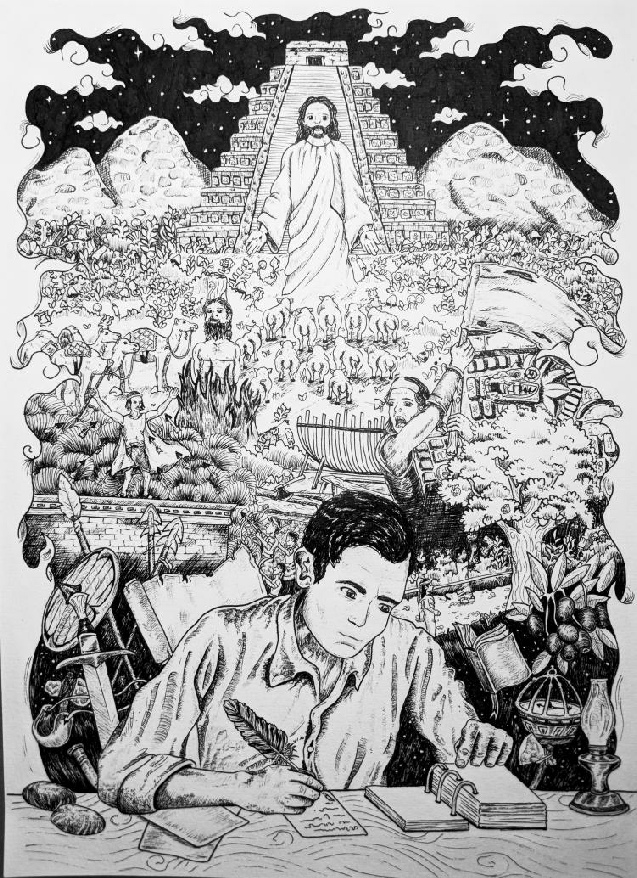 Events occurred in Book of Mormon history. Visions and revelations that Joseph Smith saw while working on the translation of the book. Lehi's dream, Samuel the Lamanite, Captain Moroni, the death of Abinadi, the other sheep, and at the top, the most important event written about in the book, the coming of the Lord Jesus Christ to the Americas. All these events are what Joseph had in his mind when translating the Book of Mormon. 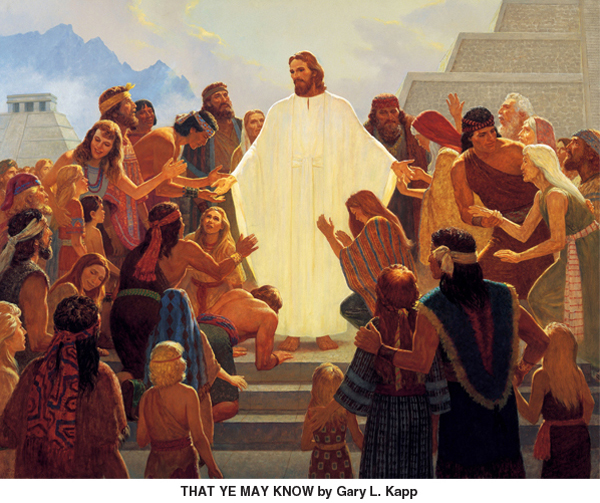 That Ye May Know

The climax of the Book of Mormon is the wonderful visit of Jesus Christ to the inhabitants of ancient America.  He gave the people an invitation and an introduction:

“Arise and come forth unto me, that ye may thrust your hands into my side, and also that ye may feel the prints of the nails in my hands and in my feet, that ye may know that I am the God of Israel, and the God of the whole earth, and have been slain for the sins of the world.”

The artist’s sister, Janice Kapp Perry, described a special experience her brother had as he was painting this picture, in an article she wrote for Meridian magazine.  (This painting is the 7th of 9 on the page.) 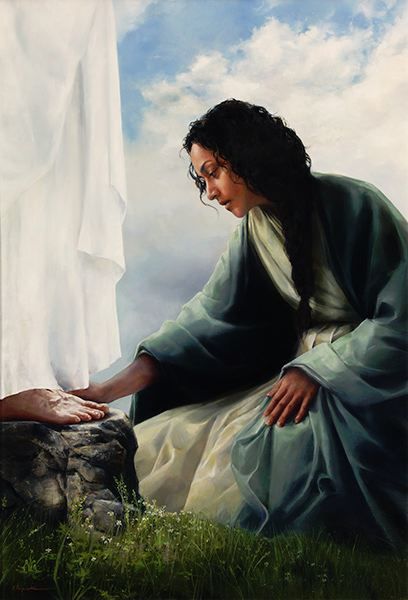 Other Sheep I Have

Jesus told his ancient apostles, “Other sheep I have which are not of this fold.  Them also I must bring, and they shall hear my voice, and there shall be one fold and one Shepherd.”  He did not explain to them who he was talking about.

The Book of Mormon answers the question of who these “other sheep” were.  They were the people of Israelite descent who the Lord had led out of Jerusalem before the Babylonian captivity.  These people lived the Law of Moses, but also understood that it pointed their hearts to their coming Messiah.

After Jesus’s glorious resurrection, He visited these “other sheep” in the Americas, as recorded in the Book of Mormon.

“And it came to pass that the multitude went forth, and thrust their hands into his side, and did feel the prints of the nails in his hands and in his feet, and this they did do, going forth one by one until they had all gove forth, and did see with their eyes and did feel with their hands and did know of a surety and did bear record, that it was he of whom it was written by the prophets, that should come.”

The figure of the Savior appears clothed in white, as described in the ancient account.  It is devoid of shadow and casts its own light on the figure of the woman.  Such powerful whiteness is also described in the ancient narrative:  And his countenance did smile upon them, and the light of his countenance did shine upon them, and behold they were as white as the countenance and also the garments of Jesus; and behold the whiteness thereof did exceed all the whiteness, yea, even there could be nothing upon earth so white as the whiteness thereof (3 Nephi 19:25).

The rock upon which the Savior is depicted as standing is intended to remind the viewer that He speaks of Himself as the Rock of Heaven (see Moses 7:53) and, as one ancient American disciple declared:  Remember, remember that it is upon the rock of our Redeemer, who is Christ, the Son of God, that ye must build your foundation; that when the devil shall send forth his mighty winds, yea, his shafts in the whirlwind, yea, when all his hail and his mighty storm shall beat upon you, it shall have no power over you to drag you down to the gulf of misery and endless wo, because of the rock upon which ye are built, which is a sure foundation, a foundation whereon if men build they cannot fall (Helaman 5:12).

The grasses and wildflowers surrounding the figures bloom in the purest white, typifying the surety of the resurrection and the hope of eternal life. 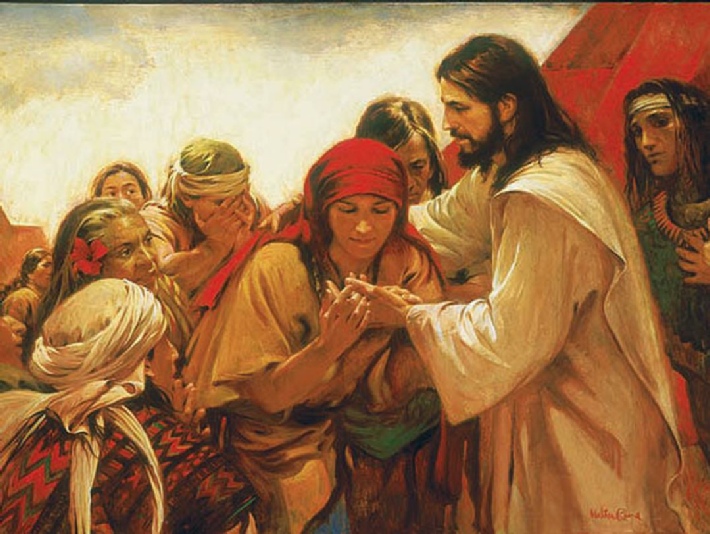 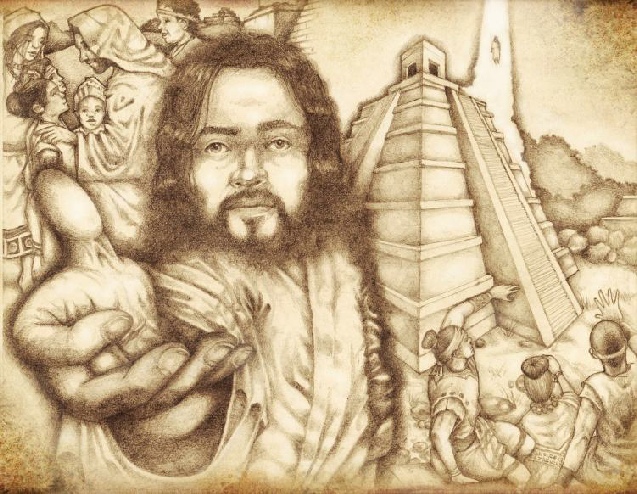 Christ Among the Nephites