A Musical Tour of Ether

Ether was the last prophet of the first great nation in the promised land, a nation which endured over a thousand years, until they became so wicked and hateful, rejecting God and all that He teaches, that they destroyed themselves.  Ether witnessed this horrible demise, but He also knew of the goodness of God, and had hope in the atonement of Christ, the resurrection, and the coming of the New Jerusalem.

“The Lord Sheltered Ether,” by Marilyn Arnold and Maurine Ozment, memorializes the life and message of this lone prophet.  Sacred Hymns of the Book of Mormon 29. 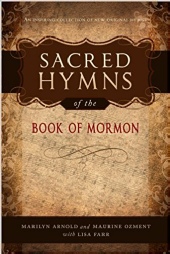 “Behold, this is a choice land, and whatsoever nation shall possess it shall be feree from bondage, and from captivity, and from all other nations under heaven, if they will but serve the God of the land, who is Jesus Christ, who hath been manifested by the things which we have written.”

God of Our Fathers, Whose Almighty Hand

This song was written in 1876 to commemorate the signing of the American Declaration of Independence.  It is a powerful reminder that patriotism must be based upon acknowledging the hand of the Lord in the founding and guiding and continued progress of this nation which currently is blessed to occupy the Promised Land.  “Righteousness exalteth a nation”  (Proverbs 14:34).

The Lord instructed the prophet, the Brother of Jared, to make barges for his people to cross the ocean.  The barges were water-tight and sea-worthy, but there was no light in them.  The Lord asked the Brother of Jared how he would solve the problem.  He smelted 16 small, white stones, then asked the Lord to touch them with His finger and make them shine.

Marilyn Arnold and Maurine Ozment recall this event in “Touch These Stones,”

Sacred Hymns of the Book of Mormon, 17.

For our journey across many seas.

When the Brother of Jared approached the Lord with a prayer of supplication, he said, “O Lord, thou hast given us a commandment that we must call upon thee, that from thee we may receive according to our desires.”

He invites all people, everywhere, to come to Him.

Lord, We Come Before Thee Now

A Latter-day Saint in Alief

text by William Hammond; music by Harry A. Dean

The Book of Mormon group Jaredites traveled across the ocean in barges which lacked helm, rudder, or sail.  They relied upon the Lord to drive them to the Promised Land, and He did.

The Book of Mormon Jaredite people traveled for months upon the sea.  It is recorded that they spent their time in praising the Lord:  “They did sing praises unto the Lord; yea, the brother of Jared did sing praises unto the Lord, and he did thank and praise the Lord all the day long; and when the night came, they did not cease to praise the Lord.”

Praise the Lord with Heart and Voice

The Lord protected the Jaredite people as they traveled through the ocean to the Promised Land.  The Book of Mormon records, “And thus they were driven forth; and no monster of the sea could break them, nither whale that could mar them.”

Master, the Tempest Is Raging

The Seventh Day Adventist Choir of the University of Nairobi

(How Great Thou Art – Swedish)

Sissel and the Tabernacle Choir at Temple Square

While much of the history of the Book of Mormon people, the Jaredites, is sad and violent, there were a few shining exceptions.  The book records that King Emer “saw peace in the land.  Yea, and he even saw the Son of Righteousness, and did rejoice and glory in his day.”

Glory to God on High

A combined choir from the Provo Missionary Training Center

The Book of Mormon teaches how essential humility is in knowing God and in progressing in this life.  It says that if people come unto the Lord, He will show them their weakness.  He gives them weakness that they may be humble.  His grace is sufficient for all, and when people have faith in God, He will make weak things become strong for them.

The prophet Ether lived alone in the last years of his civilization, and witnessed its utter destruction.  Perhaps to compensate for the horrors he saw and the loneliness he experienced, the Lord gave him great visions of future glories.  He saw the New Jerusalem built upon the Promised Land.  He also saw that the old Jerusalem “would become a holy city of the Lord.”

Ether, the last prophet of the Jaredite people, taught this Book of Mormon group that a New Jerusalem would be built upon the Land of Promise, or the American continent.

The Tenth Article of Faith